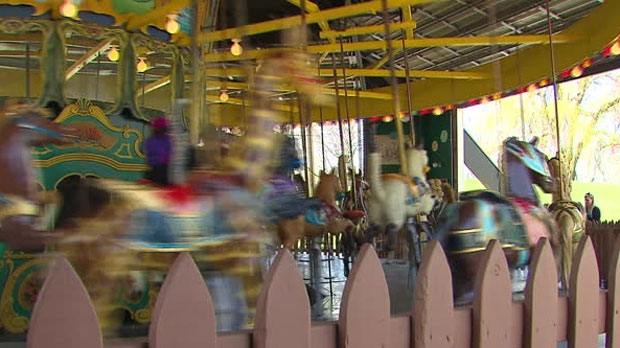 The Centreville Carousel is pictured in this undated photo.

A Toronto city councillor is hoping to convince her fellow council members to keep a piece of Centre Island history in Toronto.

The owner of a 110-year-old Centreville carousel put the ride up for sale earlier this summer to recoup some financial losses following heavy flooding, which shut down the amusement park and many parts of the Toronto Islands for months.

Speaking to CP24 on Saturday, Coun. Paula Fletcher said she hopes the city can find a way to keep the carousel.

“I think it is what we would call a distress sale,” she said. “It’s a private owner and so he’s selling it to another city.”

The Toronto-Danforth councillor told CP24 that she plans to present a motion at next month’s council meeting, asking that city staff “negotiate” and “figure something out.”

Fletcher also launched a change.org petition, asking members of the public to weigh in on the subject.

Fletcher said she believes the late Coun. Pam McConnell, who represented the Toronto Islands, would want to keep the carousel where it is.

“A lot of people in Toronto don’t have cottages so the family goes for the day. You go to Toronto Islands and you have a great time there and one of the things you do is ride that fantastic carousel. It is very unique because it is not just horses; there’s pigs, rabbits, ostriches, cats… It’s the only one in Canada.”

She noted that many cities are actually restoring old carousels and putting them on display.

“I would hate to see our Toronto waterfront and our Toronto Islands lose this,” she said.

“We have acquisition money at the city for parks uses… So is this an investment we should have or should we let it get sold to a city in the states? City council needs to think about that and citizens need to weigh in.”