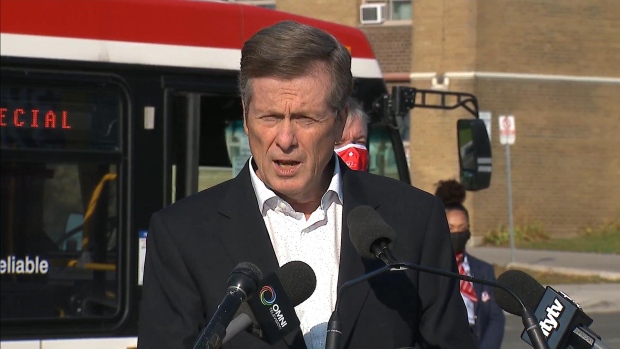 Mayor John Tory says the city is exploring the idea of winter patios, publicity campaigns promoting take-out food and other ideas to help bolster Toronto’s flailing restaurant industry amid a resurgence of COVID-19.

Tory told reporters Friday that he recently received a report about winter patios and mentioned the idea to Ontario Premier Doug Ford this morning.

“We're going to look at all the measures we can undertake in the short-term,” Tory said. “I was telling the premier this morning that I had a report on winter patios, and I think there's a real prospect there to help find a lot of places to remain, with the winter patios, for some time to come into the colder weather.”

The city has previously said that it is exploring the idea of extending the patio season. The CafeTO program has allowed outdoor heaters to be placed on extended patio spaces, but they are set to be removed by Nov. 15 in order to facilitate snow clearing.

Tory did not say how far into the winter the latest report contemplates extending patio dining.

Tory also said the city will soon be launching “TO to go,” a previously paused program to promote take-out food.

“I hope it can get underway in the next few days to really encourage Torontonians, as I do now, to take out and to get delivered food from restaurants,” Tory said.

He added that “those restaurants are in trouble and need us to maximize our efforts to take food out and get delivery from them now, and this program will encourage that.”

Thousands of restaurants in the city are already struggling and Premier Ford is expected to announce new restrictions Friday afternoon that will temporarily halt indoor dining and other activities as the province logs a record number of new COVID-19 infections.

Toronto's Medical Officer of Health Dr. Eileen de Villa has been calling for a temporary stop to indoor dining, but has said that she doesn't have the power to enact the measure on her own. Premier Ford had so far resisted her call to do so, but the province has seen back-to-back days of record-breaking new COVID-19 infections over the past week.

While politicians and health officials appear to be closing ranks on the idea that a temporary halt on indoor dining is necessary, the move comes at a time when many restaurants are shutting their doors because of the strain of the pandemic restrictions.

The mayor said that while he knows restrictions on businesses are “agonizing,” the city and the province have to do what they can to halt the spread of the virus so that more severe shutdowns are not necessary.

“We can’t have a healthy economy without healthy people,” Tory said. “So while I said earlier on that the balancing act you have to go through and considering the impact of changes that are made on business is agonizing because you know that any change you make has a negative impact on people's businesses and their way of making a living and so on, it is also the case that if we have thousands upon thousands of people getting sick or worse in the City of Toronto, we won't be able to have a healthy economy.”

People urged not to gather for Thanksgiving

Tory also urged the city’s residents Friday not to gather as they normally would for Thanksgiving this weekend and to do everything they can to stop the spread of the virus so as to preserve the hope of having a somewhat normal Christmas season.

“Please do those things because those are way more important than anything else that we can do in terms of stopping the spread and being in a position to enjoy Christmas properly.”