City has been 'overwhelmed' with number of homeless encampments, Mayor Tory says 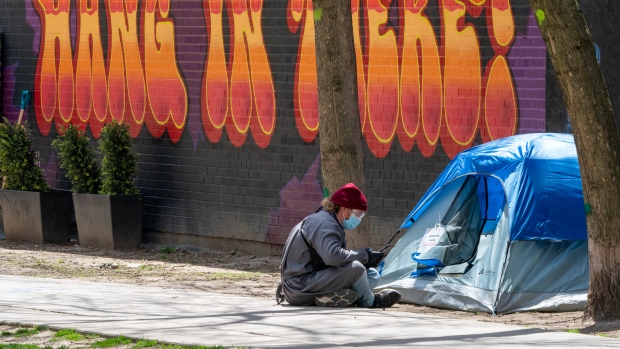 A nurse sits outside a tent at an encampment outside Sanctuary Ministries in Toronto on Monday, May 4, 2020. THE CANADIAN PRESS/Frank Gunn

Mayor John Tory is acknowledging that the city has been “overwhelmed” with the number of homeless encampments that have popped up in parks and other public places throughout the COVID-19 pandemic.

Tory made the comment during an appearance on CP24 on Monday night, noting that there is no “easy answer” to the problem.

Since March, Tory said that city staff have relocated 500 people from homeless encampments with some of those people being moved into 17 temporary shelters that have been set up at hotel sites.

Tory, however, said that it would be virtually impossible for the city to clear out all the encampments due to the scale of the problem and the need to help secure alternate housing for those being told to leave.

“There are no simple answers. If you say OK we will take the tents out of Fort York where do we put those people? You might say we will put them in the hotels but you asked me a question earlier this evening about the hotels and how people don’t want them there so it just goes on,” he said, referencing the community opposition to the presence of a temporary shelter at the old Roehampton Hotel in midtown Toronto. “We are really trying to deal with this but what we really need over the long-term is a proper supportive housing strategy for people with mental health issues and addictions issues. What goes on with those people, and it is failing of the healthcare system, is a scandal and it causes them to end up in shelters and in tents instead of some kind of a treatment facility where they would get some help.”

Several fires have been reported at encampments

Homeless encampments have popped up in numerous parks across the city since the pandemic began with city officials now estimating that 350 to 400 people are living in the makeshift tent cities.

Some of the encampments consist of just a few tents but others are quite large. For example, city officials now estimate that there are now 40 to 50 tents in one encampment that has been set up in the southern end of Trinity Bellwoods Park near Queen Street.

Speaking with CP24, Tory blamed the phenomenon, in part, on a decision by the Ford government to release “hundreds of people awaiting trial” from jails amid concerns about COVID-19 outbreaks earlier in the pandemic.

Some of those people, he said, have inevitably ended up in the encampments due to the limited space in the city’s shelter system.

Meanwhile, the presence of the encampments have led to safety concerns in some neighbourhoods.

On Monday, CP24 spoke with several residents in the vicinity of Trinity Bellwoods Park who complained about the presence of discarded needles in the area surrounding the encampment.

There have also been several fires that have occurred at encampments.

There was also another fire at an encampment in Alexandra Park earlier this month that was reportedly caused by a generator.

Speaking with CP24, Tory said that he “is not happy” about the presence of the encampments but he said that the city has to perform a “delicate balancing act” as it works to ensure that the people living in them have a safe place to go before crews move in to dismantle the makeshift structures.

City spokesperson Brad Ross said that in the case of the encampment at Trinity Bellwoods Park staff with the Streets to Home team have been working to help find alternate housing for those willing to accept it and have already moved six people into shelters or interim housing.

He said that Parks, Forestry and Recreation staff are also regularly visiting the park to ensure that debris is safely discarded.

“While encampments are not something we condone clearing a full encampment like Trinity Bellwoods right now would mean that we would have to have somewhere for all these individuals to go and currently right now we do not have that capacity in the (shelter) system,” he said.