City hopes to fill up to 4,000 potholes as part of one-day blitz 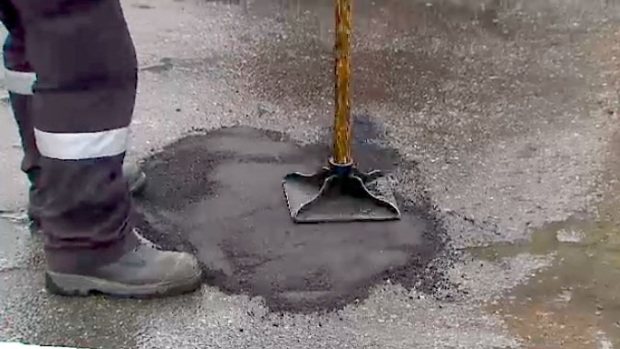 Drivers may face some delays getting around today as about 30 city crews fan out across the city as part of a one-day pothole blitz.

The crews took advantage of lower traffic volumes by focusing on the Gardiner Expressway, the Don Valley Parkway and the Allen Road between 1 a.m. and 8 a.m. The repairs on all other roads, meanwhile, began at 4 a.m. and were expected to continue until about 4 p.m.

So far this year the city has filled more than 183,000 potholes, including 49,544 potholes that were filled during five similar one-day blitzes held back in the spring.

The blitz comes ahead of a storm on Sunday that could see 5 to 10 cm of snow dumped on the city.

“What we really want to do today is concentrate on our expressways, main and arterial roads, collectors and local roads, so essentially all our roads, and get those pesky potholes filled for the upcoming winter season,” Toronto's superintendent of road operations Mark Mills told CP24 on Saturday. “We are going to do as many as we can today, I am predicting between 3,000 and 4,000 completed today, so we will hopefully have those roads in good condition for potentially the storm tomorrow.”

The city says that it has set aside $4 million to $5 million to repair potholes in 2019 as part of its $182 million road maintenance budget.

They say that each pothole costs about $25 to repair.