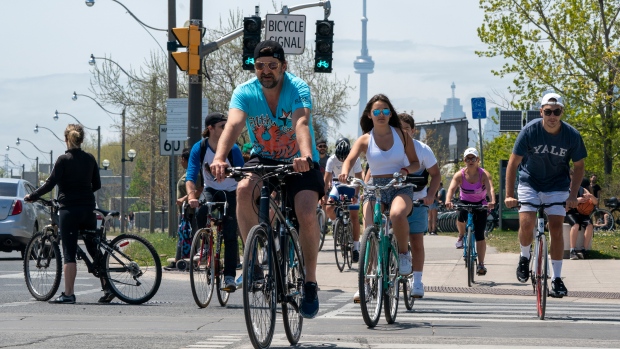 Cyclists negotiate a road crossing on a bike path in Toronto on Saturday, May 23, 2020. Warm weather and a reduction in COVID-19 restrictions has many looking to the outdoors for relief. THE CANADIAN PRESS/Frank Gunn

The city says it is working on a plan to include the popular Lake Shore Boulevard West route in its ActiveTO road closures program later this month.

Speaking at a news conference at city hall on Wednesday, Mayor John Tory said city staff are planning to expand the program beyond the current closures of Bayview Avenue and Lake Shore Bouelvard East.

Starting this weekend, roads through High Park will be closed to vehicular traffic on Saturday and Sunday to give pedestrians and cyclists more space to get some fresh air.

Closures will also return along a busy stretch of Bayview Avenue and Lake Shore Boulevard East.

“City staff are working to have an ActiveTO road closure on Lake Shore Boulevard West for next weekend (May 15),” Mayor John Tory said Wednesday.

The Lake Shore West route consistently attracted the highest amounts of foot traffic than any other area during the program last year, which ran from May to October.

According to data released by the city, an average of 18,000 cyclists and 4,000 pedestrians took advantage of the closures on Lake Shore West on days without significant rainfall last summer.

The city initially opted to exclude the busy route this year due to concerns about planned roadwork nearby that would already significantly impede vehicular traffic. The city later decided it would try to find a way to include it on certain weekends.

Tory said the city saw “good turnout” last weekend for the first round of ActiveTO closures of 2021.

“I grabbed a Bikeshare bike myself to check it out and it was great to see people outside sticking with members of their own household, it seemed, and enjoying the space for walking and running and cycling,” he said.

The following roads will be closed for ActiveTO beginning Saturday, May 8 at 6 a.m. until Sunday, May 9 at 9 p.m.: