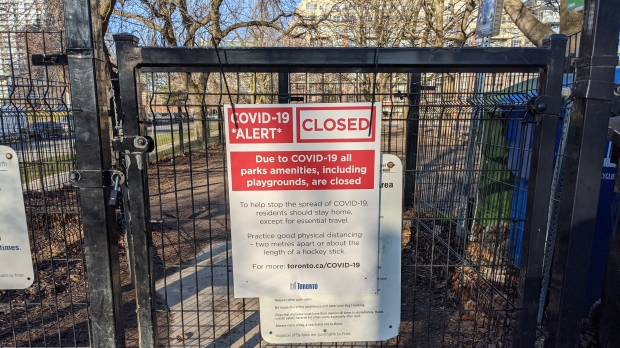 The city has shut down all facilities within Toronto parks, including off-leash dog areas. (Codi Wilson/ CP24)

City officials say they continue to receive “concerning” reports of large gatherings around Toronto, including soccer and basketball games and a 40-person gathering at a local skateboard park.

Mayor John Tory recently drafted a bylaw ordering people who do not live together to stay at least two metres apart in parks and squares to help prevent the spread of COVID-19 and the city previously closed all outdoor public amenities, including playgrounds, off-leash dog parks, sports courts and fields.

Despite these orders, the city says people continue to ignore the rules.

Municipal Licensing and Standards has been working with Toronto police, Toronto Public Health, and the city’s parks department to enforce the various orders, warning and fining those who flout the rules.

The ticket for violating the city’s two-metre bylaw is $1,000 and anyone who uses shuttered park facilities could face a minimum $750 fine.

According to the city, there were 365 complaints about people using closed amenities or not practicing social distancing on Monday alone.

Staff with Municipal Licensing and Standards spoke to nearly 850 people about breaching orders and 12 tickets were handed out, the highest number of tickets issued in a single day since the pandemic began.

Officers, the city said, had to break up several large gatherings, including a ball hockey game in Sorauren Park Town Square, soccer and basketball games at Regent Park Athletic Grounds, and a gathering at an off-leash area at Windfields Park.

“The City of Toronto… urges everyone to follow provincial orders limiting gatherings and public health recommendations to remain at home, leaving only for essential reasons.”