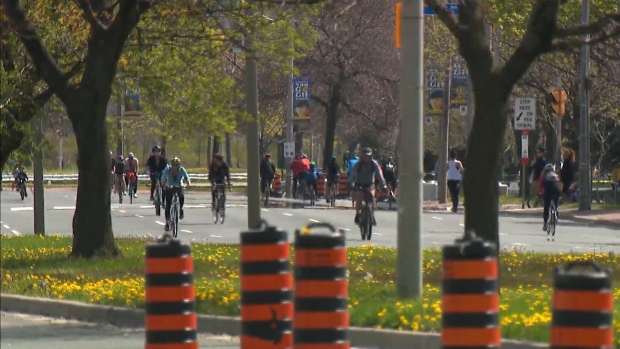 This weekend marks the final ActiveTO closures of 2020 and while it remains unclear whether the program will return next year, new data is suggesting that it has become a popular attraction for tens of thousands of Torontonians each weekend.

Since then, there have been 20 consecutive weekends in which at least one major artery was partially closed with most of those weekends seeing large volumes of cyclist and pedestrian traffic along the routes.

According to data released by the city on Friday, an average of 18,000 cyclists and 4,000 pedestrians took advantage of the closures on Lake Boulevard West on days without significant rainfall in June, July and August.

The closure on Lake Shore Boulevard, meanwhile, attracted an average of 6,300 cyclists and 5,700 pedestrians on summer weekend days while Bayview Avenue saw upwards of 2,000 cyclist and 300 pedestrians.

To further contextualize the numbers, the city says that its most popular bicycle lanes along Richmond and Adelaide streets typically see about 4,700 cyclists over an eight-hour period.

“ActiveTO has been a tremendous success. We delivered more space for physical activity, supported the overall wellbeing of Toronto residents, and helped keep people safe from virus spread – and right when we needed it most,” Mayor John Tory said in a press release accompanying the numbers. “Thousands of people, many of which are families, used the space created around busy trails and parks all summer long to get outside and take advantage of the warm weather.”

Yonge Street will also be partially closed from Gerrard Street to The Esplanade (both directions) and from The Esplanade to Queens Quay (north bound lanes only) but that closure will only take place between 8 a.m. and 3 p.m. on Sunday.

It should be noted that the Lake Shore Boulevard East closure will not be in place for the final weekend of the ActiveTO program due to construction on the Gardiner Expressway that will reduce the highway to one lane. Mayor John Tory has already asked City Manager Chris Murray to review all of the city’s pandemic-inspired programs, including Active TO, and report back on whether they should be duplicated in 2021.