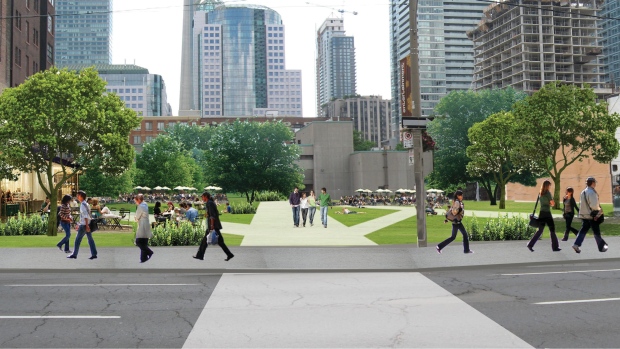 A new park planned for a surface parking lot on Richmond Street is shown. (City of Toronto)

The city has announced a series of interconnected moves that will allow it to relocate a downtown fire station and use the sale of the land that it stands on to help pay for a much needed new park nearby.

The plan, which was announced by Mayor John Tory during a virtual press conference on Friday morning, will see the city relocate the fire station that currently stands at 260 Adelaide Street into the south-facing podium of Metro Hall.

It will then sell the land that the fire station stands on to a developer, which plans to build a new high-rise residential building on the site that will include 196 affordable units alongside 456 market-rate units.

The proceeds from that sale will, in turn, help the city cover an estimated $62 million in costs related to the relocation of the fire station and a wider development planned for the area that will include the creation of a new 2,245 square metre park in a surface lot at 229 Richmond Street that it acquired back in 2019.

The city is also planning to create a new three-level, 144-space underground parking lot beneath the park that will be operated by the Toronto Parking Authority. That will cost more than $16 million but will also be covered by the proceeds from the sale of 260 Adelaide Street.

“Prior to the formation of CreateTO (the city’s real estate division) one of two things would have happened: the existing fire station might have just been torn down and rebuilt with a new fire station on that site or it would have just been sold to the highest price for somebody and developed and that would have been that and the opportunity to really put together a package of things that are going to be an immense benefit on a whole bunch of fronts across city life would have been missed out on,” Tory said during the press conference. “This is a multiple win project that is imaginative, it is sensible and it is good city building and that is something to celebrate.”

Tory said that the fire station at 260 Adelaide Street was at the end of its life-cycle and would have needed to be overhauled in the near future if the city had opted to keep it.

By unlocking the value of that site the city will now be able to pay for a new “state-of-the-art” fire station in Metro Hall that carries an estimated cost of $7.35 million. 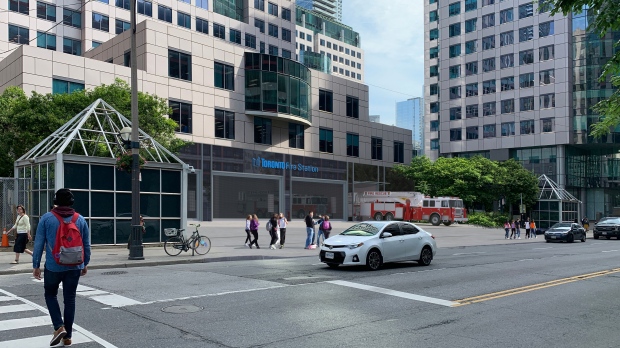 The developer, meanwhile, will pay for the construction of the new park in exchange for zoning exemptions, otherwise known as Section 37 contributions. Tory said the developer has also agreed to include a new EMS post as part of the new high-rise at no cost to the city as well as 10,000 square feet of community space.

“We are taking a surface level parking lot and turning that into a new relocated state-of-the-art fire station, a new paramedic post, 196 new units of affordable housing, a significant park in King-Spadina which is the fastest growing neighbourhood in all of North America, an enhanced childcare facility, 10,000 square feet of community space and below ground parking lot,” he said. “To make this even better unlocking the capital value of the Adelaide Street site will fund the majority of this work including a portion of the acquisition cost of the Richmond Street property.”

According to a staff report, the fire station will be relocated by the latter half of 2024.

It is not clear when the new park will be in place.

The announcement comes just days after the city’s plan to build a 21-acre park above a series of downtown rail tracks was dealt a massive blow when a provincial tribunal sided with a developer that intends to build a mixed-use community on the site.

Tory reiterated his disappointment with that decision during Friday’s news conference, calling it a “decision by an unelected board of people who substituted their judgement for the city government.”

“There is not enough parkland now given the number of people moving downtown. And the fact we have all these people living downtown is a huge plus, it is a huge plus that attracts people here from around the world. But we haven’t done everything we need to do on parkland and I am determined to make sure we do that,” he said.