Hundreds gathered for the city’s debut of the redesigned Berczy Park, a “whimsical” green space promising to be one of Toronto’s new civic landmarks.

The triangular, pet friendly park is nestled behind the historic red-brick Gooderham Building in the St. Lawrence district, and features 28 sculptures on its centerpiece, a massive two-tiered dog fountain.

“In this case someone did have the foresight to take a parking lot and make sure this became a park.”

Berczy Park created from a parking lot in 1980

The remake cost $7.2 million and took 16 months to build. It includes rows of trees, a garden, and lots of benches as well as the fountain.

“Professionals have reworked this park into something I think will be an admirable, wonderful and whimsical backyard or frontyard for people who work or live or play downtown,” Tory said.

The park is named after William Berczy, a German-born architect, surveyer and writer in Canada and is often considered a co-founder of modern Toronto with John Graves Simcoe.

The triangle of vacant land situated between Wellington, Front and Scott streets was transformed into a public park in 1980.

In recent years, Coun. Pam McConnell has worked to protect the space, alongside Friends of Berczy Park, including residents and members of a volunteer group.

Earlier this month, CP24 reported that one of the dog sculptures that enlivened its large fountain had been damaged prior to its civic reveal.

Park advocates allege that skateboarders grinding their wheels on the fountain’s ledge cracked the right paw of a Golden Retriever.

In an interview with CP24, Matthew Cutler, a spokesperson for the city’s Parks, Forestry and Recreation said "The damage was caused by a hard collision with the sculpture, but staff are unsure as to what actually hit the fountain."

Members of Friends of Berczy Park say they have confronted individual skateboarders about keeping their wheels off the park’s granite plaza, benches and the edge of the fountain itself along with its sculptures.

The city has since made an effort to protect the park by putting up signs that indicate no skateboarding is allowed.

It is planning to send the broken-pawed pup sculpture to be repaired at a foundry after Wednesday’s re-opening ceremony.

The new instillations include 27 cast-iron dogs spraying water from their mouths, one cat and a golden bone on top.

“Dogs and children is a big element that constitutes the life of this park. This is what the chemistry happen and then we invented this narrative to fournish the fountain.”

Hundreds of city officials, community members and residents gathered at Berczy Park in the St. Lawrence district for the grand re-opening of the refurbished space. (Friends of Berczy Park/Facebook) 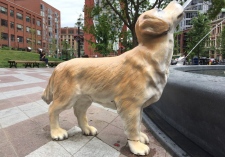 The paw of a Golden Retriever statue featured as a flourish on the newly redesigned Berczy Park fountain has been broken before the park's grand opening on June 28, the city said. (Friends of Berczy Park/Twitter)

The city has put up signs in Berczy Park that indicate no skateboarding is allowed. (Friends of Berczy Park/Facebook)

The Berczy Park fountain was redesigned by renowned Montreal landscape architect Claude Cormier who says he modeled it after the dogs who frequent the park. (CTV News Toronto)