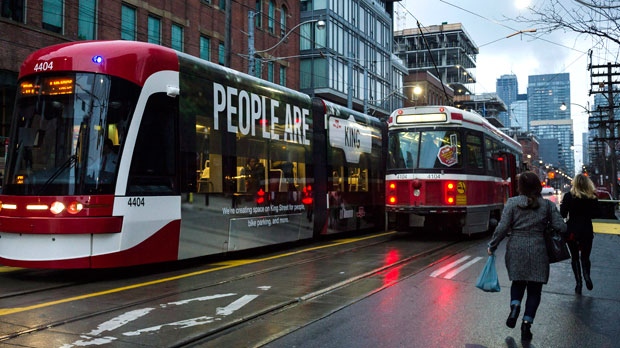 The city wants to buy you lunch – you’ll just have to head to King Street to get it.

The "Food is King” program, which begins today and runs through March 4, will provide up to a $15 credit for any resident who uses the line-skipping “Ritual” app to order food from one of 40 participating business that are located in the King Street pilot area.

The introduction of the promotion comes amid criticism from some restaurant owners, who say that the pilot project to prioritize streetcars between Bathurst and Jarvis streets has negatively impacted their business.

Some of the opponents of the pilot participated in a game of street hockey on King Street on Tuesday afternoon to illustrate the lack of cars along the previously busy corridor.

“This is meant to promote people patronizing these businesses. It is designed to encourage more foot traffic on King Street and to drive incremental purchases to restaurants and food service establishments within the pilot area,” Mayor John Tory said in announcing the promotion. “It is part of the continued effort to make sure King Street works for everyone.”

The only fine print to the promotion is that you can only use it once and you must use it to purchase food from a King Street restaurant that you have not previously used the “Ritual” app to order from.

Tory said that the program is part of an effort to ensure that King Street remains “as vibrant as ever as we continue to adjust to this new opportunity.”

It should be noted that while some restaurant owners have said that they have seen significant decreases in patrons since the King Street pilot began in November, the city did release point-of-sale data last week that indicated that total spending in the neighbourhood has been “in line with seasonal spending patterns” from the past three years.

Data from the month of January also reveals that commute times on the 504 streetcar has improved by up to three minutes. Streetcar ridership on routes serving the pilot, meanwhile, has increased from 2,047 passengers per hour to 2,892 passengers per hour.

“This speedup and increased reliability and increased usage of transit I believe has had a very positive impact on the city and the economy,” Tory said on Tuesday.

The city has not specified how much it intends to spend on the "Food is King” program.