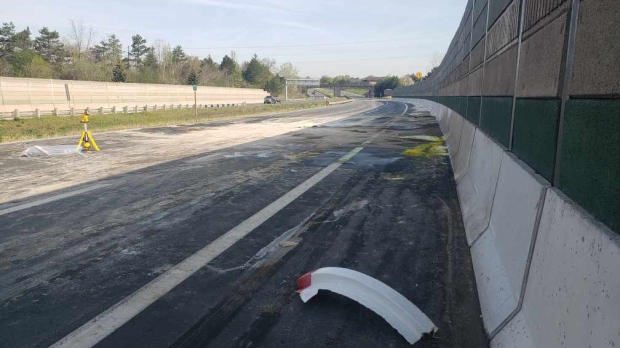 Absorbent powder soaks up acid on a stretch of Highway 406 a day after hydrochloric acid spilled all over the roadway from a damaged truck. (@OPP_HSD /Twitter)

Crews are continuing their cleanup effort a day after a strong acid spilled all over a 400-series highway in St. Catharines Ontario.

Ontario Provincial Police said over the noon hour Wednesday that they were responding to a spill of dangerous goods on Highway 406.

Police later identified the substance as hydrochloric acid – a potent and corrosive substance which is also an irritant.

Sgt. Kerry Schmidt said the vehicle started to deteriorate as it drove in the northbound lanes. It is not clear exactly how much of the acid spilled onto the road and surrounding environment.

“They're trying to clean it all up,” he said in a Twitter video posted from the scene of the spill Thursday. “It is a corrosive, it is an irritant, it is a dangerous product. You know, we've been close here for now, almost 24 hours already and we still have actually quite a bit of work to do.”

He said crews are concerned about the integrity of the roadway, as well as an adjacent concrete sound barrier. Images from the scene Wednesday showed the vehicle sitting next to the wall as the acid leaked.

“Some of it (the acid) has gone across this wall on the other side, down into a ditch area where it's going to get into catch basins and obviously into the environment,” Schmidt said. “There's a couple of storm sewers here as well that they've been washing out. They need to re-vacuum and do a few more pump-outs of the product. Some of it has also swept or spilled down across the lanes into the centre shoulder ditch area as well. So there's still a lot of work to be done here.”

He said more equipment is being brought in to help with the cleanup effort and the crews are “working as hard as they can."

The Ministry of Transport said they dispatched hazmat crews, fire crews and other teams to the scene Wednesday.

In an email to CP24.com, Ontario’s Ministry of the Environment said that it “takes all spills and threats to the environment very seriously.”

“Ministry staff have attended the site and are working with other agencies to gather information, identify and address any potential environmental impacts,” ministry spokesperson Gary Wheeler said.

He said the remaining cargo from the damaged truck was transferred to another tanker overnight and that hazardous materials crews are now working to remove the impacted soils.

“The highway is being swept with a neutralizing powder and the integrity of the highway infrastructure will be assessed prior to opening the northbound lanes (where the spill occurred),” Wheeler said.

“The ministry will ensure that any waste is properly identified and managed and that those responsible for the spilled material take all reasonable steps to clean-up any impacts to the environment.”

The highway was closed both ways all afternoon and evening Wednesday between Westchester and Glendale avenues.

The southbound lanes of the highway reopened around midnight, but the northbound lanes in that area remain closed and Schmidt said it is not yet clear when they will reopen.

“I know it’s a frustrating time for motorists in this area but I don't have a specific timeline as to how long it'll take,” Schmidt said. “I suspect it'll likely be most of the afternoon before we have any lanes reopened here on highway 406 northbound into St. Catharines.”

He advised motorists to continue avoiding the area.

Clean up continuing on #Hwy406 nb from Glendale Ave after hydrochloric acid spill yesterday. No confirmation of reopening at this time. pic.twitter.com/l3ggtQA0bS