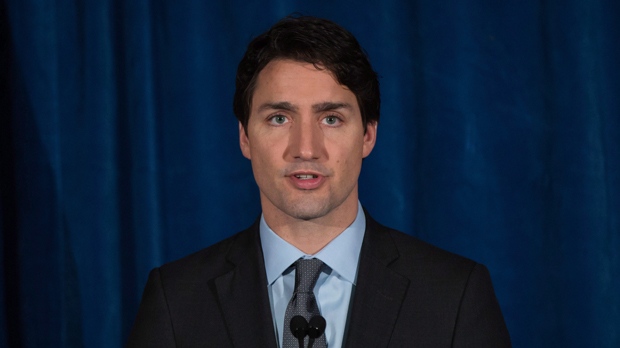 Prime Minister Justin Trudeau speaks during a news conference with Mayor Gregor Robertson at City Hall in Vancouver, B.C., on Thursday December 17, 2015. Trudeau's visit to Vancouver City Hall was the first by a prime minister since his father, former prime minister Pierre Trudeau visited in 1973. THE CANADIAN PRESS/Darryl Dyck

WASHINGTON -- Prime Minister Justin Trudeau will be visiting the White House at a fortuitous moment should he hope to chat with the current U.S. president about the cast of characters hoping to become the next one.

The first White House state dinner in 19 years for a Canadian leader will be happening right in the heat of primary season, after voters in key states like South Carolina have already weighed in.

Those votes hold consequences for the Canada-U.S. relationship and whether it ends 2016 the way it begins -- with a spirit of amiability and ideological alignment between two national leaders.

The prime minister and president have conveyed mutual affection and a desire to downplay potential irritants, like the Keystone XL pipeline and Canada's shift in the Mideast combat mission.

The prime minister and Barack Obama share many other points of agreement -- illustrated in the span of a few days where Trudeau enthusiastically attended a climate summit; introduced a tax hike on the rich; and welcomed Syrian refugees at the airport in a move applauded in a New York Times editorial.

Any of these could pass for Obama priorities. In fact, the president appeared to liken Trudeau's election win to his own by specifically mentioning the two words famously stamped on his pastel-retro 2008 posters.

"I know Canadians are incredibly inspired by your message of hope and change," Obama said during his first press conference with the rookie prime minister.

It's unclear how much will actually change, on a substantive level, on Canada-U.S. files. Keystone XL is dead for now. Another softwood-lumber dispute could arise with the U.S. Congress, now that a decade-old deal has expired. Both countries' lawmakers will consider ratifying the new Trans-Pacific Partnership trade deal.

An adoption vote must also be held on one of the lesser-known legacies of the Harper era: an agreement that would revolutionize border-crossing, to ease backlogs by allowing customs checks away from the frontier.

One expert on Canada-U.S. relations pines for a higher level of ambition. Chris Sands says NAFTA and subsequent agreements have scratched the surface of free trade, but really just cherry-picked what industries to liberalize.

He'd love to see North America talk about true free trade -- a single market for goods and services and, if possible, even a worker-mobility agreement.

"I would like a back-to-the-future recommitment to the (NAFTA) project," said Sands, director of the Center for Canadian Studies at Washington's School of Advanced International Studies, a division of Johns Hopkins University.

That being said, he fears the continental agenda could be destined for the back-burner as the Obama administration prepares its exit and an incoming administration faces daunting domestic challenges.

The biggest challenges for the U.S. economy, he said, are at home.

There's not much Justin Trudeau, Stephen Harper, or any Canadian prime minister could really do, said Sands, to climb that elephantine pile of presidential distraction.

"I see a lot of uncertainty coming out of Washington -- which is going to be tough for Canada."

Of course, personal relationships can make a difference. Brian Mulroney is fond of saying that privileged access to the U.S. president is worth its weight in gold.

If Hillary Clinton's the next president, parts of her platform dovetail neatly with the Trudeau agenda. Both have platforms calling for a new North American climate-and-energy partnership, for instance. She's voiced skepticism about the TPP, so is unlikely to press Trudeau too hard for speedy adoption if it's still unresolved a year from now.

She professes to oppose Keystone XL, while her Republican foes are staunchly in favour -- and their approval of the pipeline could provide Trudeau a political win he'd never even asked for.

It's on the Republican side where things get interesting, with a three- or four-way race underway. It'll start to become clearer by the time of Trudeau's visit who might prevail.

Consider the policies of Chris Christie. He recently said he'd bar Syrian refugees -- even five-year-old orphans. He summed up his climate policy this way in an NBC interview: "I don't buy that it's a crisis," he said. When pressed on what science he'd based that on, Christie replied: "That's my feeling."

Christie is one of the GOP moderates.

Another is Marco Rubio. He reacted to the Trudeau win by saying he hoped to work with him on approving Keystone. Their first conversation about Cuba could be awkward.

Fidel Castro may have been a family friend to the Trudeaus -- to the Rubios, he was a boogeyman. As a child, Rubio dreamed of leading a counter-revolutionary army to overthrow Castro, his autobiography says. The son of Cuban immigrants wrote of a subsequent dream in his college application letter: designing a legal system for a post-Castro Cuba.

Regardless of that, Sands said he suspects they'd get along, with Rubio being a more run-of-the-mill Republican: "I think he'd be one of the easier people for Trudeau to deal with."

Trudeau has already hinted, publicly, at less-than-warm feelings towards the two leading candidates from the anti-establishment wing of the party: Donald Trump and Sen. Ted Cruz.