Clinton takes aim at Trump as she promotes book in Toronto 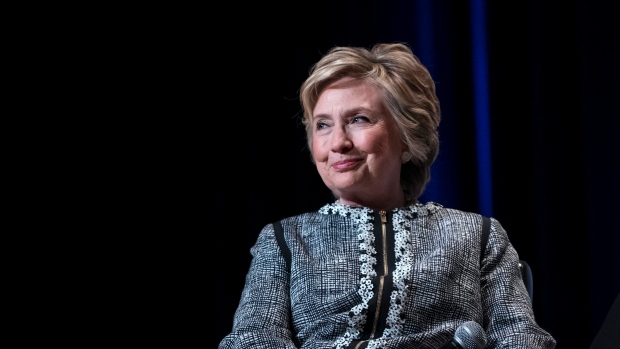 TORONTO -- Former American presidential candidate Hillary Clinton told an appreciative crowd on Thursday that more women in politics is the way to overcome the sexism that pervades the political world, and that democracy is under assault.

The Democrat was in Toronto to promote her new best-selling memoir, "What Happened," in which she describes her stunning loss in last year's election to political newcomer, Republican Donald Trump, a man often criticized as a misogynist.

Many reasons exist why politics can be a downright infuriating prospect for women, she said, citing the example of a group of men sitting around a table deciding what health care women need.

At the same time, politics can also be immensely rewarding by providing women a voice at the table, said Clinton as she praised Prime Minister Justin Trudeau for appointing Canada's first gender-balanced cabinet.

"I especially appreciate Canada's commitment to an open and diverse society that welcomes immigrants," she said to loud applause.

In fact, she joked that she had received many suggestions to relocate to Canada. While she won't be moving, she did enjoy her summer vacation in Quebec, she said.

Clinton said the Russian "misinformation campaign" during the presidential election was largely successful because Americans are finding it increasingly difficult to distinguish between truth and reason.

"There is no such thing as an 'alternative fact' despite the war by some to wage a war on reason and evidence," she said. "We can't let that happen."

Trump won't condemn the Russian interference in American politics because there is growing evidence of "very tangled" financial relationships between the president, his associates and Russia, she said.

Russian cyberattacks on the Democratic National committee and emails stolen from her campaign, she said, warrant an independent commission to get to the bottom of the issue.

Although some seats were empty, organizers pegged the size of the crowd at above 5,000 -- the majority of them women. They roared in delight as Clinton spoke about her trials and tribulations, interrupting her frequently to voice approval, laugh or clap.

Clinton's publisher, Simon and Schuster, had billed her speech as a "detailed and surprisingly funny" account of her past and plans for the future, and the former secretary of state did not disappoint her audience.

"She gave me confidence that there is a future and we can do something," Jan Moore said afterward. "It was encouraging and uplifting."

Clinton, whose 15-city tour will also include Montreal and Vancouver, talked of the lost election and the difficult aftermath, adding at times she simply wanted to crawl under the covers until the distress eased.

As for her future, she said she intends to be an activist citizen agitating for human and women's rights now that she is free of the constraints of being a politician in the glare of the public eye.

Clinton, through a moderator, answered several questions, taking shots at Trump as the "first reality TV candidate" who was offensive, "stalked" her, and was an all-round "creep."

"What Happened" has already garnered huge international attention, reportedly having already sold more than 300,000 copies in all formats and the highest opening hardcover for non-fiction in five years since its official debut Sept. 12.

Some critics have praised it for its revealing honesty and poignancy; others have called it boring and self-serving.

Another audience member, Linda Ford, said she planned to read the book. Ford said she was "disappointed" in the outcome of the election but pleased the ex-politician is using her experience for the common good.

Clinton is scheduled to speak in Montreal on Oct. 23, and in Vancouver on Dec. 13.