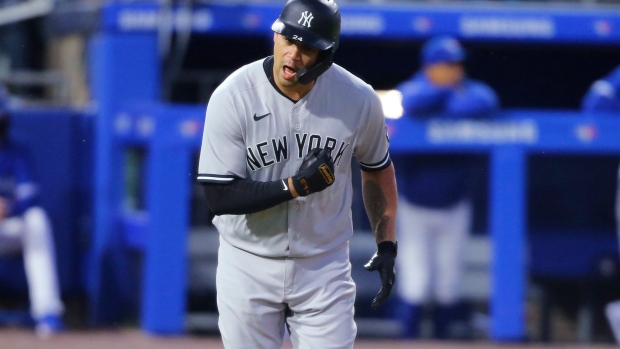 Sanchez's 10th homer of the season in the seventh gave the Yankees back-to-back wins behind key pinch hits, following Clint Frazier's go-ahead double in the eighth inning of Tuesday's 6-5 victory.

Chapman allowed hits to the first two batters in the ninth, putting runners at second and third, but escaped for his 14th save. Cole (8-3) held the Blue Jays to four hits.

Marcus Semien and Cavan Biggio homered for Toronto, which has lost three straight and five of seven. Ross Stripling (2-4) limited New York to three hits and two walks over 6 1/3 innings and tied a season high with nine strikeouts.

In the ninth, Vladimir Guerrero Jr. led off with a single and Teoscar Hernandez followed with a double to right field. After striking out Randal Grichuk, Chapman fielded a comebacker and started a play in which Sanchez threw out Guerrero, who was trying to retreat to third base. The call was upheld after a 70-second video review.

Chapman then got Lourdes Gurriel Jr. to fly out to end the game.

Plate umpire CB Bucknor was hit in the mask by Chapman's first pitch to Gurriel, a ball Bucknor ruled was fouled off by Gurriel. However, Bucknor didn't immediately signal foul ball as he staggered from being struck, and Hernandez came almost all the way home before being stopped.

Replays showed Gurriel may not have made contact with the pitch. Toronto manager Charlie Montoyo argued for a review. The umpires convened, affirmed among themselves it was a foul ball, and informed Montoyo the play was not reviewable.

The ninth-inning drama overshadowed a fine pitching duel between Cole and Stripling.

After the Yankees scored a first-inning run, Stripling set down 18 of 20 batters and allowed no hits until Miguel Andujar singled leading off the seventh, the precursor to Sanchez's homer, which elicited chants of “Gary! Gary!” from a Yankees-centric crowd of 7,271 at Toronto's temporary home in western New York.

Cole, meanwhile, retired 22 of his last 25 batters, with the only blemishes being a two-out walk in the second inning, Biggio's fifth-inning homer, and Hernandez reaching on an error in the sixth.

Toronto reliever Rafael Doliz, who replaced Stripling, left the game with an apparent injury after issuing a four-pitch walk.

ADDING UP THE STRIKEOUTS

With his first-inning strikeout of Grichuk, Cole broke a tie for the most punchouts by a Yankees pitcher over the first 14 starts of a season. Cole entered the game tied with Masahiro Tanaka, who had 113 in 2014.

Yankees: RHP Corey Kluber (shoulder strain) is on a throwing program, playing catch from 60 feet. ... RHP Darren O'Day (strained rotator cuff) threw a bullpen and could begin a rehab assignment this weekend. ... Yankees manager Aaron Boone said 1B Luke Voit (strained oblique) is doing well in his rehab and could return within the next week.