Comically excessive scrubbing of surfaces not doing a whole lot of good: experts 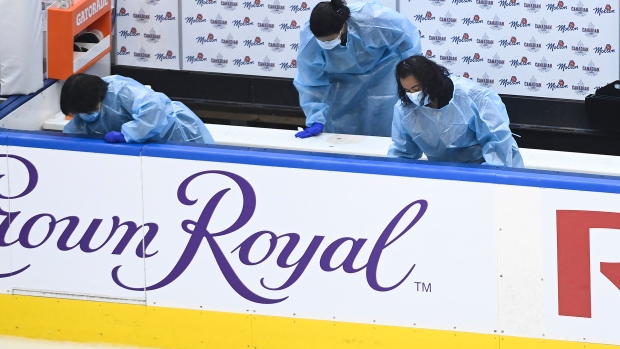 Cleaning crew staff disinfect the teams benches after the New York Islanders defeated the Florida Panthers during NHL Eastern Conference Stanley Cup playoff action in Toronto on Tuesday, August 4, 2020. Some of the stringent disinfection drills may seem over-the-top, especially as scientists concede that surface transmission is playing less of a role in spreading the novel coronavirus than initially thought, but most infectious disease experts say that doesn't mean we should ignore cleaning altogether. THE CANADIAN PRESS/Nathan Denette

Denver Broncos football players were filmed last week walking through a door frame that misted them in disinfectant spray before they stepped onto their outdoor practice field.

The video was posted on the team's Twitter account with the caption: “Time for work. But first, we sanitize,” sparking criticism from those who dubbed it an egregious example of “hygiene theatre,” or a comically excessive show of cleaning and sanitization protocols.

This new ritual is not unique to sports teams, with fitness centres, grocery stores and other businesses climbing on board to boast to customers about their stringent disinfection drills amid the COVID-19 pandemic.

Some of it may seem over-the-top - especially as scientists concede that surface transmission is playing less of a role in spreading the novel coronavirus than initially thought - but most infectious disease experts say that doesn't mean we should ignore cleaning altogether.

We just have to be more strategic about where we're putting those resources, says Jason Kindrachuk, a virologist at the University of Manitoba.

“If (the Broncos) had posted a video disinfecting the locker-room (instead of the players themselves), they wouldn't have been lambasted,” said Kindrachuk. “That to me the most important thing.

“Where is transmission likely to occur? Well, it's probably going to happen where you have people that aren't physically distant sharing space, where ventilation's not as great as outside.”

Hygiene and disinfection is still important, Kindrachuk stressed. But trying to determine what's excessive and what isn't is difficult.

Early in the pandemic, when scientists were still parsing through information about COVID-19, there was an increased emphasis on fomites - inanimate objects that could become contaminated and transmit the virus through contact with humans. Sanitizing and thorough disinfecting of high-touch surfaces was promoted for that reason.

The latest research, however, suggests fomite transmission is not as common as respiratory droplet spread from person-to-person.

That doesn't mean it can't happen though, and Dr. Isaac Bogoch, an infectious disease expert with the University of Toronto, says no one should be suggesting we abandon hand hygiene or disinfection practices.

“It's more of a 'to what extent?' question,” Bogoch said. “These deep cleaning (protocols), I'm not quite sure how much added value they have, but high-touch surfaces do need to be cleaned.

“It's important to recognize that if someone coughs or sneezes onto a surface, there could be enough viable virus there that if someone touches that and rubs their eyes, nose or mouth, they could get it.”

The incorporation of deep-cleaning strategies in a business setting may not be limiting the spread of COVID-19 to an extent originally believed, but Bogoch says if it gives customers peace of mind, that makes it effective in another way.

The same goes for personal behaviour, he added. So if someone wants to wipe down their groceries before putting them in their cupboards, that's fine.

“There's been a lot of - for lack of a better word - shaming people who are doing this and I don't think that's entirely fair,” Bogoch said. “It might not provide much incremental benefit, but if that's what's enabling someone to get through their day, let it be.”

Steven Taylor, a clinical psychologist and professor at UBC, says the emergence of “hygiene theatre” was an understandable outcome of the pandemic.

He says humans have evolved to avoid dirty surfaces, and because cleaning has historically been a more widely accepted practise than mask-wearing in Western society, it's an easy action to jump on.

It's also a way for people to “seize control” during a time of uncertainty.

“Cleaning, in a sense, is hardwired into our genome. It's adaptive for us to clean,” Taylor said. “It is a very visible thing that people are doing; an active approach. You can see people sanitizing the touchpad in a store, for example.”

Kindrachuk worries that excessive displays of hygiene might give people a false sense of security. Knowing a subway or streetcar is cleaned regularly doesn't make it a safe option if it's crowded with other people, for example.

But Taylor says that type of “risk compensation,” where we abandon other safety precautions because we're placing a higher emphasis on cleaning, doesn't actually happen.

People who practise hand hygiene and surface disinfecting are the same people likely to adhere to physical distancing and wear face coverings, he says.

“This hygiene theatre serves to remind people about the importance of those other (precautions).”

Kindrachuk says people need to continue an all-encompassing approach to combating the virus, especially as the first wave of the pandemic seems to be tapering off in Canada.

While it's fine for a business to up its cleaning strategy if it can afford to do so, Kindrachuk warns against losing sight of other methods that have proved effective, including testing, contact tracing and physical distancing.

It's also not the time to relax or ignore hygiene practices either, he added.

“You have people really push for fast reopenings, and we're at that precipice where we need people to stay on board.”