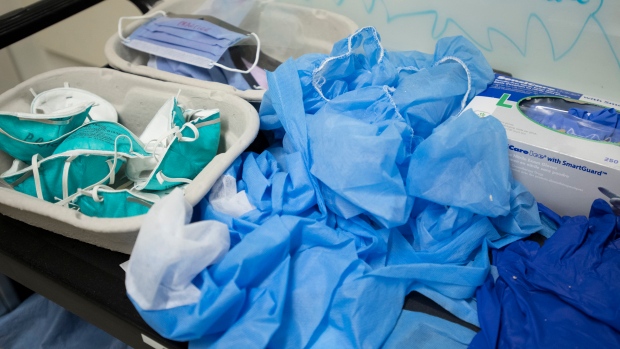 OTTAWA - Canadian companies that answered the government's call to produce ventilators and other desperately needed equipment during the COVID-19 pandemic say they're worried opposition MPs are now demanding disclosure of the contracts they signed with Ottawa.

And they're warning they'll be less likely to step up in the future if they can't trust the government to keep sensitive business information confidential.

Michelle Rempel Garner, the Conservative health critic who penned a sweeping motion to compel the disclosure, says the companies are being needlessly worried by a Liberal government that does not want scrutiny of its COVID-19 pandemic spending.

Her motion would order the government to turn over to the House of Commons health committee all records on a raft of issues related to the government's handling of the pandemic - including the purchase of personal protective equipment, medical devices and pharmaceuticals.

It is poised to pass in a Commons vote Monday, with the support of the Bloc Quebecois and NDP.

“We are very concerned with the risk of proprietary, sensitive or confidential business information suddenly being disclosed to the public,” Canadian Manufacturers and Exporters president Dennis Darby said in a letter Friday to Procurement Minister Anita Anand.

One quarter of the CME's 90,000 members stepped up to help with the COVID-19 response, said Darby, and he is worried that politicizing this process will make them reluctant to do so again.

“If these disclosures are too broad, it will negatively impact business operations for manufacturers in Canada and around the globe. Furthermore, we worry that the reputations of many manufacturers â€¦ will be unfairly tarnished.”

Rempel Garner said Friday these concerns are being generated by “complete Liberal spin.”

She said the motion has safeguards to protect national security, personal health information and proprietary contractual data, and the companies should not be concerned.

The parliamentary law clerk would be tasked with ensuring that information is redacted before release, said Rempel Garner.

“I have faith in that process,” she said. “I think this is really just the Liberals trying to delay the production of documents.”

However, the government is concerned that the law clerk does not have the expertise to determine what constitutes commercially sensitive information.

The federal government has spent more than $6 billion on personal protective equipment, medical devices and vaccines in its bid to respond to the COVID-19 pandemic.

Most of the details of those contracts are secret, sometimes even the name of the supplier.

Anand has said repeatedly that some information has to be kept confidential to protect sources and safeguard the deals Canada is making in a very competitive world where many countries are looking for the same supplies right now.

Opposition MPs are specifically concerned about a $237-million contract for 10,000 ventilators awarded to FTI Professional Grade Inc. That company subcontracted the production of the ventilators to Baylis Medical, a medical-device company chaired by former Liberal MP Frank Baylis. He was president of the company for more than 20 years before he entered politics.

Multiple cabinet ministers have said the contract is with FTI, not Baylis. Bloc Quebecois MP Alain Therrien said that's only because the Liberals knew a contract directly with Baylis would be noticed.

“Come on, how stupid do they think we are,” he asked in the House of Commons Thursday.

John Power, a spokesman for Innovation Minister Navdeep Bains, said FTI's was one of four contracts awarded for ventilators, on the advice of an expert panel of government officials, biomechanical engineers, respiratory therapists, medical practitioners and manufacturing-supply-chain experts.

They reviewed 11 submissions by Canadian companies to make ventilators last spring and the four contracts for up to 40,000 ventilators resulted from their advice.

Anand said there was a lot of worry in April that there would not be enough ventilators available to treat COVID-19 patients. Canada had only one company that made ventilators at the time.

A spokeswoman for Baylis said Friday the company is making 10,000 ventilators in Mississauga, Ont., at a cost of $21,000 each, a price that includes funds spent to get Health Canada approval for the ventilator. The Baylis product is a Canadian model of one made by U.S. company Medtronic.

A written statement from the company said Baylis was approached by FTI to help it make ventilators about a week after the federal government put out its call for Canadian-made machines.

Joanne Langley, the co-chair of the COVID-19 Vaccine Task Force, wrote a separate letter to opposition party leaders expressing concern that the motion demands all records related to the task force's advice to the government on potential vaccine candidates.

She said to do its work, the task force has entered into confidentiality and non-disclosure agreements with Canadian and international vaccine companies

Langley offered to meet with a small group of MPs to brief them on the task force's work, provided that the MPs are also subject to the same confidentiality promises.

Her concerns were underscored in a statement from Innovative Medicines Canada, which said several of its member companies have entered confidential agreements with the government to provide potential vaccines.

“The public disclosure of such information could have a negative impact on the very companies that are working to help protect Canadians from the virus,” the group said.

Flavio Volpe, head of the Automotive Parts Manufacturers' Association, said that 25 auto parts companies have retooled to produce PPE during the pandemic.

He said he has no concerns about disclosing their contracts but is worried about doing so in a highly politicized environment.

“Nobody signed up to be a football,” he said in an interview.

Volpe warned that some companies “may not feel the same sense of call to action next time because now we're part of something that is political rather than doing our civic duty.”