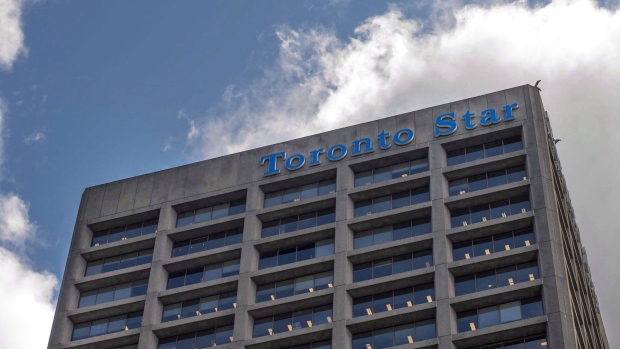 OTTAWA -- Torstar Corp. and Postmedia Network Canada Corp. agreed to lists of employees who would be terminated as part of their deal last year to swap dozens of mostly community newspapers, Canada's competition watchdog alleges in court documents.

The Competition Bureau also claimed in documents used to obtain search warrants earlier this month that the companies conspired to divide up sales, territories, customers and/or markets for advertising or flyer distribution in certain regions.

"Postmedia and Torstar were competitors or potential competitors prior to the transaction," Pierre-Yves Guay, the acting associate deputy commissioner of competition, wrote in the application for the search warrants.

Under the agreement between Torstar and Postmedia last year, 41 newspapers changed hands and 36 were closed, mainly in Ontario regions served by multiple publications, at a cost of nearly 300 jobs.

As part of the deal, the watchdog said the companies included lists of which Torstar and which Postmedia employees would be terminated and agreed to a transitional services agreement.

"It is my understanding that the only employees that will continue to be employed are from those acquired properties that were announced to remain open," Guay wrote.

The companies also agreed they would not compete in specific areas for five years as part of deal in November.

No charges have been laid and the allegations included in the court documents have not been proven in court.

The Ontario Superior Court released the documents after Torstar and its Metroland subsidiary sought the disclosure last week.

Torstar and Postmedia said Thursday they do not believe they contravened the Competition Act and that they are co-operating with the investigation.

Postmedia CEO Paul Godfrey has said the companies never talked about what each would do with the newspapers it was buying, while Torstar CEO John Boynton has said the transaction was designed to allow increased geographic synergies.

According to the court documents, the Competition Bureau said it was contacted in December by John Hammill, a former Postmedia regional sales director at the now-closed Orillia Packet and Times.

Hammill told the watchdog that he was informed he would lose his job by a Postmedia human resources staff member about 10 minutes after the deal was announced.

According to his termination letter, Hammill's termination allowance was paid by Postmedia, the former owner of the Packet and Times, the bureau said.