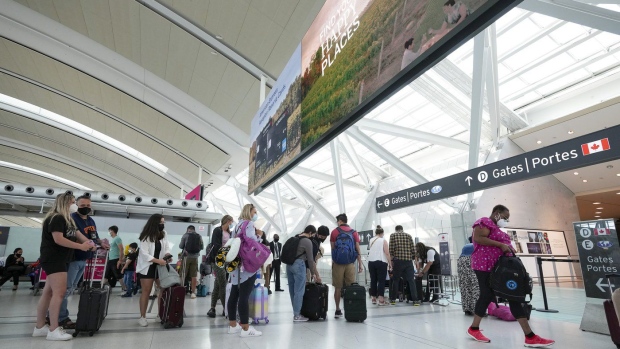 People line up before entering the security at Pearson International Airport in Toronto on Friday, August 5, 2022. THE CANADIAN PRESS/Nathan Denette

MONTREAL - Canada's transport regulator says its backlog of air passenger complaints is growing as a staff shortage comes up against a summer of airport chaos, which itself is due in part to labour shortages.

Tom Oommen, director general of analysis and outreach at the Canadian Transportation Agency, says the quasi-judicial body is trying to hire more facilitators who can help resolve customer complaints against airlines.

“We are hiring,” Oommen said in a phone interview. “But people are always looking for other opportunities and places to leverage their knowledge. It's kind of an employee's market these days.”

The complaint backlog ballooned to more than 15,300 in May. It rose further “in the last month or so,” Oommen said, as a surge in travellers overwhelmed airline and airport resources following two years of muted demand.

Oommen said it's “entirely possible” the regulator will receive more than 15,000 new complaints - distinct from the existing backlog - this fiscal year, which began April 1. That total would top the 12,158 fresh complaints from the previous 12 months, many relating to refunds withheld following flight cancellations by airlines.

It takes about 19 business days on average to resolve a complaint once it reaches an agency facilitator, but that file now takes about a year before it lands on their desk, with case numbers continuing to climb, Oommen said.

Complaints seeking compensation for flight delays and cancellations - and, more recently, misplaced luggage - comprise the bulk of cases, he said.

Worker retention is among the staffing challenges facing the Gatineau, Que.-based regulator, which pays new facilitators between $65,500 and $70,700 per year, according to a federal government job posting.

A potential for more complaints came in the form of an agency decision last month. On July 8, it ruled that a crew shortage causing cancellation or delay typically does not allow an airline to refuse compensation - the amount can be as much as $1,000 - to affected travellers.

Carriers such as Air Canada and WestJet had been categorizing flight disruptions caused by staff shortages as a “safety” issue and thus ineligible for compensation claims under federal rules.

Despite the recent tribunal decision against that stance, Air Canada said in late July it was continuing the policy, which it first told staff to adopt in a Dec. 29, 2021 directive obtained by The Canadian Press.

“The decision provides a level of interpretation that we haven't had before with respect to the categorization of crew shortages,” Oommen said, calling the ruling “significant.”

If it pushes airlines to discontinue the policy, however, then fewer complaints related to compensation for delays and cancellations could arise. Oommen also noted that each case is unique, including those involving flights disruptions caused by lack of workers.