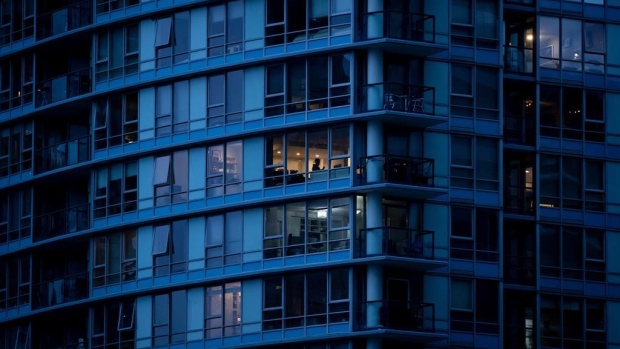 A resident, centre, in an upper floor condo is silhouetted as people have been urged to stay home to help prevent the spread of the coronavirus, in Vancouver, on Monday, March 23, 2020. THE CANADIAN PRESS/Darryl Dyck

Condo prices in a number of Toronto neighbourhoods have dropped as the city grapples with the economic impacts of the COVID-19 pandemic, new data suggests.

Zoocasa, a local real estate agency, released data on Wednesday, which shows the drop in median condo prices between February to April in the city as a whole, as well as in various Toronto neighbourhoods.

“In February 2020, Toronto real estate was gearing up for what may have been a record-breaking spring season, with home sales up a staggering 45 per cent year-over-year.” the agency stated on Wednesday,

Fast-forward to April 2020, the agency said that the year-to-year condo sales dipped by a “steep” 70 per cent.”

The agency used data from the Toronto Regional Real Estate Board to compare how the median prices changed between February and April 2020 in 35 of the city’s neighbourhoods.

In Toronto, as a whole, the median price for a condo dropped by $65,000 since February, with some neighbourhoods hit especially hard, the data found.

“In a true reflection of economic and healthcare measures in place for COVID-19, condo apartment sales dropped 64 per cent since February, with just 482 transactions taking place across the city in April compared to 1,335 in February,” Zoocasa stated in a news release.

The data showed that fewer than 10 sales took place in 21 Toronto neighbourhoods, which is “three times the number of neighbourhoods with a low sales volume in February.”

Here's a look at how median condo apartment prices changed in Toronto's 35 neighbourhoods between February and April 2020: