Conservatives hang on to symbolic victories as bid for majority fails 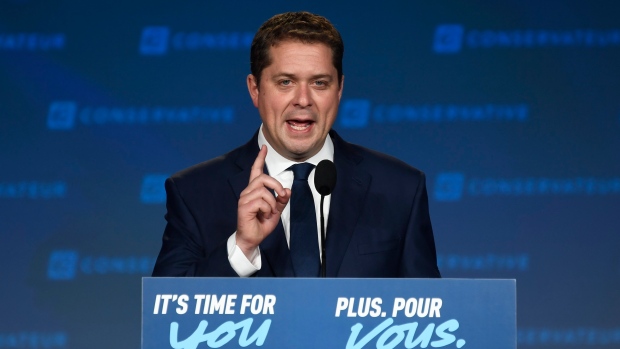 REGINA -- Conservative Leader Andrew Scheer has spent his political life defying expectations but on Monday night failed to achieve what could have been a career-defining one: toppling a first-term government.

Instead the Conservatives will settle back into Opposition status with nearly two dozen more MPs, emboldened by a number of symbolic victories in Monday's vote and preparing for the day when, in a minority government situation, they can bring the Liberals down and trigger an election.

"Tonight Conservatives have put Justin Trudeau on notice: Mr Trudeau, when your government falls, Conservatives will be ready and we will win," Scheer said to loud cheers in a Regina conference centre.

The party swept every seat but one in Alberta and Saskatchewan, defeated former Conservative MP Maxime Bernier who had started a splinter right-wing party, and was ahead in the popular vote.

But deputy party leader Lisa Raitt lost her Toronto-area seat to a Liberal, and the party failed to make any significant gains in the vote-rich region.

Next door in Quebec, despite winning back Bernier's seat, the Conservatives actually lost seats overall thanks to a surge from the Bloc Quebecois.

Scheer and Bloc Leader Yves-Francois Blanchet have been locked in a struggle for Quebecers' support the entire 40-day campaign. The Conservatives were running several high-profile candidates around Quebec City, but none were elected.

A sore spot for the Conservatives in the province had been their pledge for a national energy corridor that could carry oil, gas and electricity across the nation; Blanchet accused Scheer of wanting to force a pipeline across the province, for which there's little support in Quebec.

But another issue was Scheer's personally socially conservative views. Party insiders were frustrated in the early days of the campaign when Scheer was repeatedly attacked for them, but floundered in his response.

Then there was Ontario. A Liberal attack strategy of repeatedly linking the Conservatives federally to the provincial party led by Premier Doug Ford paid off; one Conservative organizer said he heard about Ford at one out of every seven doors. Raitt was a casualty of that.

Raitt had also challenged Scheer for the party leadership in 2017, and was installed as deputy leader in a bid to unite the social-conservative and more progressive wings of the party.

The question of Scheer's leadership did hang in the balance Monday night.

Under the terms of his party constitution, after failing to form a majority government he will face a leadership review at the party's next convention.

One of his constituents, Adrienne Ivey, said the results Monday were not what she had been hoping for, but Scheer should stay on.

"He's been a leader for a very short time, so I think that experience is a good thing and it's only onward and upward from here."