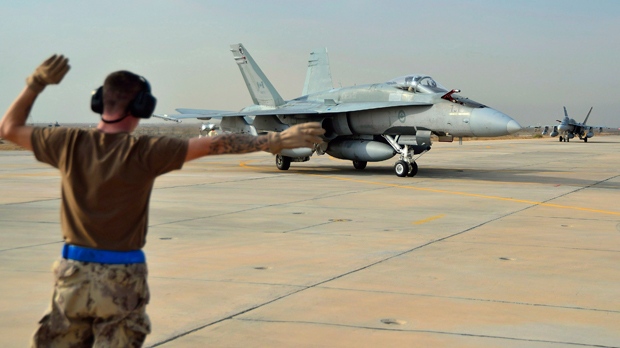 A Canadian Armed Forces CF-18 Fighter jet from 409 Squadron taxis after landing, in Kuwait, on October 28, 2014. Two CF-18s struck a fighting position belonging to the Islamic State in Iraq and the Levant, northwest of occupied Mosul, the embattled country's second-largest city on Thursday, Dec. 17, 2015. THE CANADIAN PRESS/HO, DND-MND

OTTAWA -- As MPs in the House of Commons thrashed out their conflicting views of how to prosecute the war against militants of the Islamic State of Iraq and the Levant, the Canadian military quietly acknowledged Wednesday its bombing campaign has come to a conclusion.

The end to combat missions comes just days ahead of the Feb. 22 deadline set by the Liberal government when it announced the re-tooled mission last week.

A statement from National Defence said the campaign ended on Feb. 15. The Defence Department's website listed two strikes the day before -- both in Iraq.

Under the terms of the revised mission, Canada will leave an aerial refuelling tanker and two CP-140 surveillance aircraft behind to help the U.S.-led coalition continue the bombing mission.

National Defence says the fighters will soon make their way home, but did not give a specific timeline.

The Conservatives, who under Stephen Harper drafted the original mission to send Canadian fighter-bombers into battle, condemned the changes as a step back from the fight.

The NDP is asking for a clearer definition of the new effort, seeking to know if Canadian trainers will be in harm's way and urging the government to spell out an exit strategy.

The government is stressing a broader approach, including more humanitarian aid and help for refugees.

Trudeau says the training mission is the right role for Canada in the right place.

"Our goal is to allow local forces to take the fight directly to ISIL, to reclaim their homes, land and future," he told the Commons.

"We will be more significantly involved in counter-terrorism measures, improving chemical, biological, radiological and nuclear security in the region."

Trudeau rejected the notion that Canada is backing away from the fight.

Trudeau characterized the fight against ISIL as defending peace and democracy against "terrorism and barbarism."

"ISIL stands against everything that we value as Canadians and poses a direct threat to our people and our friends."

He said the government's revamped mission will be robust, comprehensive and effective and will deliver results on the ground.

"There are times in the life of a Parliament, and in the history of this House, when providence calls upon us to lead," Ambrose said.

"Lead by conviction, lead by a responsibility we collectively have to the Canadian people and lead by fighting evil -- and, sadly, today is not a day of leadership."

Withdrawing from the bombing campaign means pulling a vital component out of the U.S.-led coalition effort against ISIL, she added.

"To blunt the sharp end of our spear is not in keeping with the contributions of our allies," she said. "We know, too, thanks to poll after poll, that it's not what most Canadians want us to do."