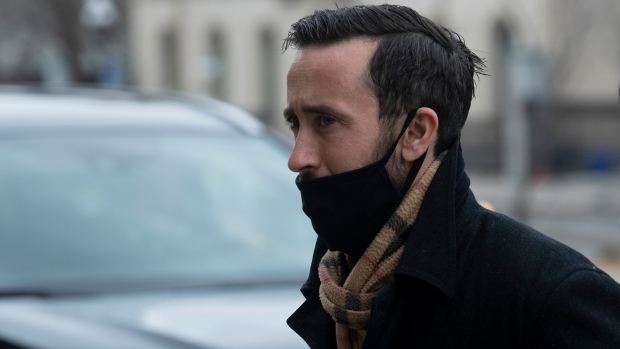 OTTAWA -- Conservative members of Parliament will vote today on whether one of their own can remain on the party's benches.

Derek Sloan is facing potential expulsion from caucus just 15 months after he was first elected as an MP.

Party leader Erin O'Toole triggered the effort to boot him after learning Monday that Sloan accepted a donation from a known white nationalist last year - news that broke one day after O'Toole declared there's no room in his party for far-right extremism or racism.

Sloan has acknowledged he did accept the donation, but has claimed there was no way he - or any other MP - could have vetted every single contribution to his campaign.

Sloan's aggressive social conservative views have been a thorn in the Conservatives' side ever since he ran for leadership of the party last year.

He's faced accusations he's racist, drawn condemnation for his views on LGBTQ rights and for his anti-abortion stance, all leading to periodic calls he should be tossed from the party's benches.

But a new tension emerged in recent weeks over Sloan's efforts to mobilize his own base of support to attend the coming Conservative policy convention.

The party is investigating whether his use of robocalls to get people to register for the convention runs afoul of telecommunications regulations.

His use of the party's membership list to try and encourage socially conservative delegates to register has also ruffled feathers.

Social conservative groups are traditionally quite active at Conservative conventions but it's believed their ranks swelled during the leadership race, given both Sloan and Leslyn Lewis' campaigns explicitly targeted those constituencies.

With strong enough numbers, resolutions backed by social conservatives would have a better chance of passing, including one that would delete a policy pledging that a Conservative government will not regulate abortion.

That in turn would jeopardize O'Toole's efforts in recent weeks to present the party as more centrist.

In a letter to supporters sent late Tuesday night, Sloan urged them not to give up the fight for delegate spots even if he's turfed from caucus.

“I urge you to stick with this process,” he wrote.

“It should now be very evident just how important it is that we have a strong presence at the upcoming convention. If we do not, the types that wish to send me packing will do our party great damage.”