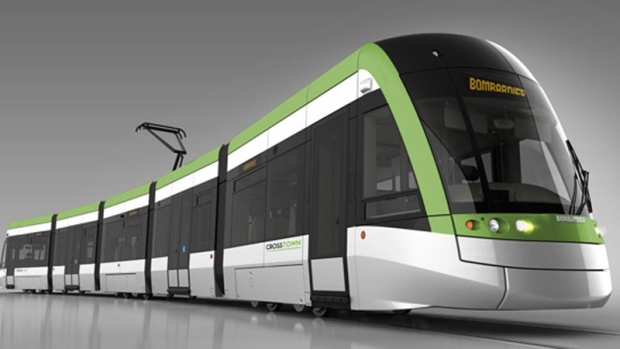 The province has announced that it is moving ahead with a 11-kilometre light rail transit line along Finch Avenue West. (Metrolinx)

Construction on a new 11-kilometre, 18-stop light rail transit line along Finch Avenue West will begin in 2016 but residents will have to wait a lot longer for another planned LRT on Sheppard Avenue East, Minister of Transportation Steven Del Duca has announced.

The province first committed to funding the $1.2 billion Finch Avenue West line in 2009 and on Monday Del Duca told reporters at Humber College’s North Campus that his government is now ready to follow through on that promise.

Del Duca, however, confirmed that construction on a planned LRT for Sheppard Avenue that was also announced in 2009 will not begin until the Finch West Avenue line is up and running. Construction on the $1 billion Sheppard LRT was expected to begin in 2017 and be completed by 2021.

The estimated completion date for the Finch Avenue West LRT is 2021.

“The challenges faced by commuters, the commuters from my riding (Vaughan) for example, don’t start or end at Steeles Avenue. These are regional challenges and they require a regional solution,” Del Duca said in making the announcement. “The people of our province want us to put progress ahead of politics and deliver results instead of more rhetoric and that is exactly what we are doing.”

The new LRT, which is being entirely paid for by the province, will run along the surface of Finch Avenue from the planned Finch West subway station at Keele Street to Humber College.

Discussing the line with reporters Mayor John Tory said it will provide “badly needed transit” to Toronto residents and is proof that both the city and the province are committed to “getting on with” with important infrastructure projects for the Greater Toronto Area.

The new Finch West LRT is one of three similar lines planned for Toronto as part of Metrolinx’s $50 billion big move. The other lines include the currently under construction Eglinton Crosstown and the Sheppard East LRT.