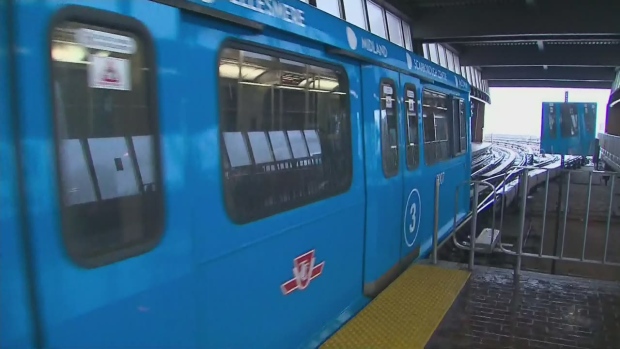 The costs associated with both the Scarborough subway extension and the Eglinton West LRT exceed the economic benefits they will provide by billions of dollars, according to new business cases released by Metrolinx.

The business cases reveal that the total capital and operating costs associated with the three-stop Scarborough subway extension over a 60-year period will approach $6 billion while the economic benefits provided by the line will only be $2.8 billion.

Metrolinx’s preferred route for the Eglinton West LRT, which would be an extension of the Crosstown LRT and travel from Mount Denis towards Pearson International Airport, performed even worse.

The business case for that project found that its total capital and operating costs would be $4.9 billion but it would only provide $1.7 billion in economic benefits.

Metrolinx's own guidelines suggests that projects need a cost-benefit ratio of at least one to be considered economically viable but both the Scarborough subway and the Eglinton West LRT fell short of that – 0.66 and 0.34, respectively.

The business cases nonetheless recommend advancing design and procurement work for the projects, which are both part of the Ford government’s $28.5 billion transit plan for the city.

Speaking with reporters at city hall on Saturday, Mayor John Tory said that he believes the Scarborough subway extension will “stimulate huge numbers of jobs” and prove worthwhile in the long run, despite the seemingly negative outlook provided by the business cases.

“I would say first of all that if anyone is building transit on the basis that it should be profitable than we never would have built any,” he said. “It is one of those things where the business case will best be made for the transit we decide to build today 20 years from now. If you look at Yonge Street from an airplane or you look at Yonge Street from the top of the CN Tower you will see all the way up that spine of the city where we built transit starting in the 1950’s that development took place, places where people work, places where people live. I am just about getting on with building transit.”

Coun. Josh Matlow, who has long opposed the Scarborough subway extension, issued a statement on Friday in which he said that the business case confirms that the project simply isn’t worthwhile.

Matlow said that an LRT network, like the one that was scrapped by former Mayor Rob Ford, would “serve more people for far less money” and should be built before the Scarborough RT “falls apart.”

The business case, however, did not compare the project with an LRT and instead used a “business as usual” benchmark for its analysis, in which buses eventually replace the Scarborough RT.

“I am just done with the debates going on with this. We have an agreement with the three governments, we are getting on with it,” Tory told reporters on Saturday. 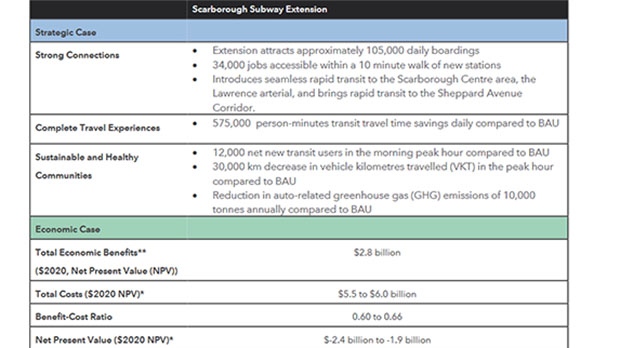 The business case for the Scarborough subway extension says that there would be approximately 105,000 daily boarding’s at the new stations daily with about half of those by new riders (52,000).

That’s about three times the daily ridership of the Scarborough RT (35,090), which is slated to be decommissioned once the subway extension is built.

At the peak of morning rush hour, the business case estimates that the three new stations would attract a combined 14,700 riders per hour with the terminus station at Sheppard Avenue and McCowan Road accounting for the highest volume of ridership (about 40 per cent).

The business case also states that the extension will result in a “significant improvement” in access to a number of growing Scarborough employment areas. By 2041, it says that there will be approximately 34,000 jobs within a 10-minute walk of one of the new stations.

As for the Eglinton West LRT, the business case says that it would account for 37,000 daily boardings, including 13,000 by new riders.

The business case also says that the line would save riders travelling from Yonge Street and Eglinton Avenue to the Square One Shopping Centre in Mississauga an average of 14 minutes per trip when compared to existing bus service.