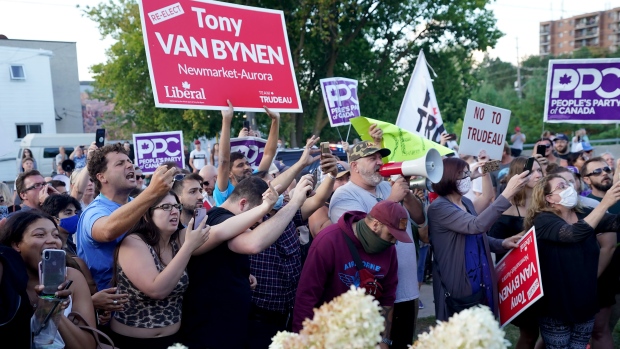 The People’s Party of Canada got a handful of its election signs on TV newscasts over the past few hours. The PPC signs were in the background as Liberal Leader Justin Trudeau made his way to the bus in London and got showered by a handful of gravel.

In one shot you can clearly see a sign for Chelsea Hillier, the PPC candidate from Elgin-Middlesex-London. Last night Hillier tweeted “Justin Trudeau had quite the warm welcome tonight in London!” That was last night. Tuesday Hillier’s tone shifted a little.

“After 18 months of devastating government intrusion into the lives of Canadians it is evident tensions are high. I strongly encourage all Canadians to demand their voices be heard. This must be accomplished peacefully. Violence diminishes the message and I will not condone that,” she said in a message posted to Twitter.

Hillier, and her supporters, drove to the riding of London North Central to confront Trudeau.

Until today the Bernier campaign has flown way under the media radar. The PPC home is on social media. That is where one can see the crowds showing up for campaign events across the country and what appears to be growing support among voters.

I checked with some of the pollsters watching the campaign. Some are now giving the PPC up to eight per cent support and that support is trending up. The most recent EKOS tracking poll puts the PPC four points ahead of the Green Party.

The London protest and those signs brought on questions about the People’s Party of Canada today. Trudeau was asked what he thought of the presence of the PPC at his campaign stops.

“We haven't seen organized political opportunism like unfortunately, we're seeing with the PPC signs that have suddenly now appeared over the past couple of days,” he said.

A Quebec reporter asked Conservative leader Erin O’Toole about the PPC and its leader, Maxime Bernier. O’Toole also condemned the protests and called for a “respectful debate.”

“It's completely unacceptable to see harassment of political figures,” he said.

Maxime Bernier tweeted this morning “Some idiots threw pebbles at Mr. Trudeau yesterday. I condemn it. Words are our weapons. But physical violence is ALWAYS wrong.”

Bernier did point out that he was the victim of an assault last week in Saskatchewan. A protester slammed a raw egg on his head. Bernier noted “none of the other party leaders made any statement” about that protest.

John Wright, the executive vice president at Maru Public Opinion, said support for the PPC is “broader and deeper than people think.” He said Bernier’s followers are saying “enough is enough. You can’t exclude me.” Wright pointed out Bernier is talking about a “revolution” to protect threatened liberties in society. Bernier and the PPC are “creating a community,” Wright said and linking like-minded Canadians across the country.

Maxime Bernier won’t have a chair at the leaders’ debates this week. His supporters might see that as another reason to feel excluded from the campaign and from Canadian politics.