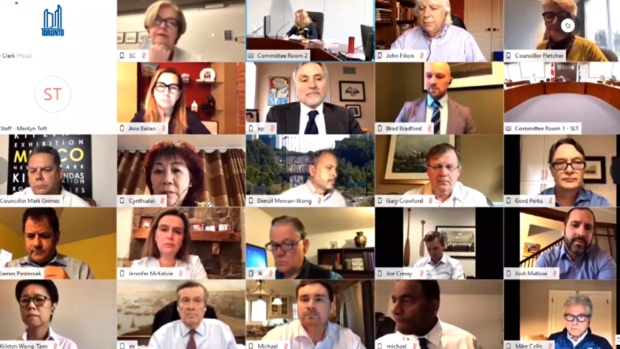 A significant expansion of Toronto’s bike lane network brought about by the COVID-19 pandemic was approved Thursday as council met virtually.

A staff report released earlier this week called for the city to speed up the planned expansion of its bike lane network by installing an additional 25 kilometres of dedicated cycle lanes as early as this summer.

Some of the highlights of the accelerated network plan include a new bike lane along University Avenue from Bloor to Adelaide streets and on Danforth Avenue from Broadview Avenue to Dawes Road. The city is also planning to extend the existing Bloor Street bike lane from Shaw Street to Runnymede Road.

Staff say that most of the lanes will be “substantially completed” by the end of July with some of them finished in June.

“COVID 19 has forced us to reimagine and re-envision our city and that includes the way we get around while physically distancing,” downtown city councillor Joe Cressy said during Thursday’s meeting. “We have been told that at 30 per cent capacity (on the TTC), in other words 510,000 daily riders, it would be hard to physically distance and if a significant number of those people who commute in and out of the downtown core go from public transit into cars our existing road system will not have the capacity to serve them. We will be stuck in gridlock.”

Cressy said that the acceleration of the network plan represents the “biggest cycling move in the city’s history in one year” and includes several projects, such as the bike lanes slated for Danforth and University avenues, that he said will be “game changers.”

That sentiment was shared by several other councillors.

University-Rosedale Coun. Mike Layton said that there has been “decades of advocacy” to get some of the routes into the city’s plans.

He said that while there are “shortcomings with the plan,” council shouldn’t let those get in the way of moving forward.

Beaches-East York Coun. Brad Bradford, meanwhile, said that the city is in the midst of a “fundamental paradigm shift” and that the way people get around Toronto may look different in the months and years ahead.

“I fully agree that there will be a moment in July when folks will wake up to a very different Danforth and there will be confusion and anger but there will also be hope and optimism and a recognition that things today and things tomorrow will not be the same as they were months and years ago,” he said. “Leadership is about recognizing that, standing up and helping move the city forward.”

In addition to adding infrastructure for pedestrians and cyclists, the plan being considered by council today also recommends spending $1.5 million on public realm improvements along Danforth Avenue to draw more people to the corridor.

The cost of the bike lanes themselves is pegged at about $3 million.

While staff say that most of the lanes are proposed as “rapid installations with temporary materials and minimal change to the street design” they note that the changes along Danforth Avenue will be more substantial.

The bike lane proposal passed council on Thursday afternoon by a vote of 23-2.

It is just the second time that council is meeting virtually since the outset of the pandemic.