COVID-19 case counts are 'cresting' in Ontario but ICU numbers will remain stubbornly high for some time: modelling

The number of COVID-19 patients in intensive care units will begin to decline in the coming weeks but not at a fast enough rate to allow hospitals to begin tackling a massive surgical backlog involving more than 250,000 procedures, according to new modelling.

The modelling, which was prepared by Ontario’s Science Advisory Table, presents three different scenarios for the road ahead.

In the best-case scenario, which assumes a further reduction in mobility and an “effective sick pay” program that goes beyond the three days promised by the Ford government this week, the number of COVID-19 patients taking up beds in intensive care units will immediately begin to decline from today’s record high of 884 and dip down to about 500 by the end of May.

But in a less optimistic scenario, which officials concede is closer to the current path Ontario is on, hospitalization rates would decline at a much slower rate that would see nearly 800 COVID patients still receiving treatment in the ICU by this time next month.

The worst-case scenario with no stay-at-home order and limited public health restrictions would see 1,400 COVID patients in intensive care, accounting for nearly two-thirds of all available beds.

The numbers are an improvement on modelling released two weeks ago, which warned that the number of COVID-19 patients in the ICU would top 1,000 under every single scenario and was likely to reach 1,500 by mid-May even with “strong” public health measures.

Nonetheless, Ontario Science Table Co-Chair Dr. Adalsteinn Brown says that the rosier projections will not allow for the resumption of elective surgeries and procedures “for some time,” underscoring the serious situation faced by a healthcare system that “is no longer functioning normally.” 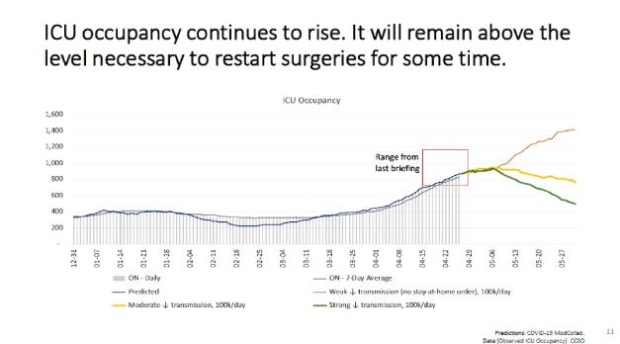 Ontario’s rolling seven day-average peaked at 4,327 one week ago but it has dropped by 12 per cent since then and now stands at 3,810.

The modelling released by the science table on Thursday, however, reveals that cases are still growing in 20 of Ontario’s 34 public health units.

It suggests that daily case counts will decline to about 2,500 by early June in the most likely scenario or around 1,000 in the best-case scenario.

But it also warns that case counts may gradually increase once the stay-at-home order expires, even as more and more Ontarians get vaccinated.

“The longer you stretch out that stay-at-home order, the further your press down the line, the more time vaccine has to take hold and you may not actually see a rebound if you continue it,” Brown said.

The modelling that was released by the science table two weeks ago prompted the Ford government to issue a series of new restrictions, including the closure of all recreational amenities.

It also temporarily handed police the power to arbitrarily stop and question people to ensure compliance with the stay-at-home order, though the premier walked that back within 24 hours and later issued a public apology for doing so without fully considering the ramifications.

Brown told reporters on Thursday that mobility rates, based on anonymized cell phone data, have declined “substantially” since then and are approaching where they were during the peak of the second wave of the pandemic in January.

But Brown said that “workplace mobility remains too high” and represents a real threat to the control of the virus.

For that reason, he that the apparent “cresting of cases” should only be viewed through the prism of “cautious hope” for now and should not be used to justify a loosening of public health restrictions anytime soon.

“If we start to relax public health measures you can see there is a potential for an increase in cases again which could be quite dangerous, given that our ICUs have not yet started to empty out in any way,” He said.

Health-care staff get ready to prone a 47-year-old woman who has COVID-19 and is intubated on a ventilator in the intensive care unit at the Humber River Hospital during the COVID-19 pandemic in Toronto on Tuesday, April 13, 2021. THE CANADIAN PRESS/Nathan Denette