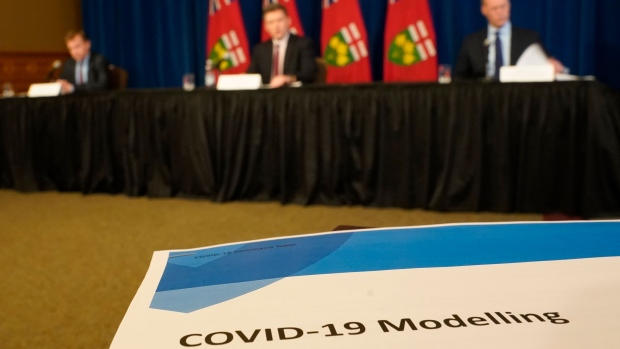 COVID-19 cases are back on the rise in most areas of Ontario and the province could see nearly 6,000 cases per day by April even outside of a so-called “worst case scenario,” a model released Thursday suggests.

The Ontario COVID-19 Science Table says that outside of the vaccination of all willing residents and staff in long-term care homes, “progress has stalled” in combatting the pandemic in the province.

As of March 6, cases were increasing markedly in all but 13 of the province’s 34 local public health units.

In the “medium” scenario outlined by modellers, cases will reach 5,800 per day by early April, and could hit 8,000 per day in the worst case scenario.

Even in a more optimistic projection, cases reach 1,650 per day by April 2.

Dr. Adalsteinn Brown said the worst case scenario would only occur with some combination of a widespread reduction in the current public health measures, as well as a sustained increase in the number of people not following those measures.

"The measures only work if people follow them," he said.

The Science Table says the optimistic scenario is only possible with slower than observed growth in B.1.1.7 cases across the province, a drop in the reproductive rate of variant cases and the “degree and timing of relaxation of public health measures.”

Over the past two weeks, the province has seen cases grow by an average of 1.19 per cent per day.

The modellers suggest the relaxing of restrictions across the province in late February as well as the continued spread of the B.1.1.7 coronavirus variant is to blame for an end to declines, which researchers now believe is more deadly than earlier strains as well as being more transmissible.

“It’s a function of how loosening public health measures, increased mobility between communities and growth of variants come together,” Brown said.

The scientific director of the Science Table said Thursday that a third lockdown,even more restrictive than what existed in the past, is inevitable.

The levelling off in case declines has already showed up in hospitalizations, with hospital occupancy no longer on the decline and ICU occupancy climbing slightly in recent days.

Under the most optimistic scenario, ICU occupancy due to COVID-19 will reach 390 beds by the end of March, with the worst case scenario seeing 650 beds filled by that time.

The modellers say what is done in the next few weeks, irrespective of the vaccine rollout, will determine a lot about the next few months.

Brown said the province is still “two or three weeks away” from seeing case and hospitalization declines due to the rise in the number of people who have received a COVID-19 vaccine.

“Our behaviour over the next few months is critical in determining the quality of our summer,” modellers wrote in their briefing.