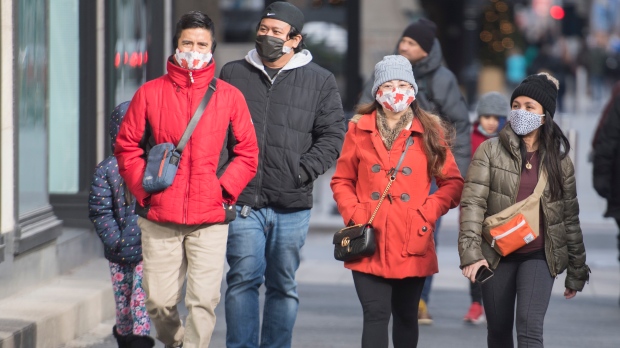 People wear face masks as they walk along a street in Montreal, Saturday, Nov. 21, 2020, as the COVID-19 pandemic continues in Canada and around the world.THE CANADIAN PRESS/Graham Hughe

OTTAWA - Four provinces reported new highs for daily COVID-19 infections on Saturday as the virus continued its siege on some of the country's most vulnerable areas.

Health officials in New Brunswick, Ontario,Saskatchewan and Alberta all reported new single-day peaks in diagnoses, recording 23, 1,588, 439 and 1,336 new cases respectively, as the nation's top doctor sounded the alarm yet again.

“These developments are deeply concerning as they put countless Canadians at risk of life-threatening illness, cause serious disruptions to health services and present significant challenges for areas not adequately equipped to manage complex medical emergencies.”

Among those areas is the fly-in community of Fond du Lac First Nation in northern Saskatchewan, which was reporting 63 COVID-19 cases as of Saturday -- 55 of them active.

About 1,000 people call the remote community home, and more than 300 of them have been told to self-isolate.

Saskatchewan Premier Scott Moe called the record 439 new cases in his province on Saturday “very concerning,” adding the seven-day average for new daily cases is the highest it's ever been at 203.

Nunavut is also recording a surge in new COVID-19 cases, though it hasn't beat its single-day high.

The territory saw 25 new cases on Saturday, including 22 in hard-hit Arviat and three in Whale Cove.

There are 107 active infections in the territory, which just confirmed its first case a little more than two weeks ago.

People arriving in the Northwest Territories and Yukon are once again required to self-isolate for 14 days, while a provincewide public health order in B.C. has barred social gatherings of any size in private homes except between members of the same “core bubble.”

There are now 8,012 active infections in Manitoba, including 385 new cases, and 10 more people have died. The province has for weeks recorded the highest per-capita rate of new infections in Canada.

Premier Brian Pallister was put on the defensive on Saturday as he addressed Progressive Conservative party members at a convention, saying “every province west of Nova Scotia has its highest numbers in the last few days, including Manitoba.”

“Trying to make the political argument that Manitoba's government missed the boat when everybody in the western world is under attack right now is not a fruitful thing - even if it was right, and it isn't,” he said.

Quebec has reported 1,189 new cases and 32 more deaths, five of which occurred within the last day, while 646 people are in hospital.

Alberta set a new single-day record for new infections for a third straight day with 1,336 cases detected on Saturday. Officials have said the high caseload has strained the health-care system and overwhelmed contact tracing efforts, as public health workers don't know where most of the 11,274 active infections in the province were contracted.

The surging numbers come a day after new federal modeling showed daily COVID-19 tallies could reach 20,000 nationwide if Canadians don't drastically limit their contacts in a bid to stop transmission.

Tam reported 52,739 active infections across the country, with an average of 71 deaths and 1,840 people treated in hospital every day between Nov.13 to 19.

The surge is “putting pressure on local healthcare resources and forcing hospitals to make the difficult decision to cancel elective surgeries and procedures in several areas,” she said in a statement.