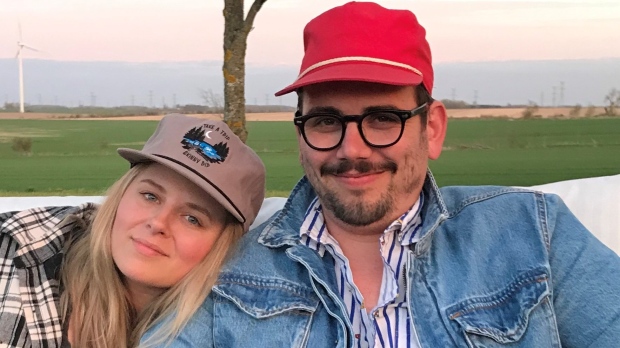 Lexi McKenna and her husband Jeff Richards are shown in a handout photo taken in Grand Valley, Ont. McKenna's work day now includes breaks to help her mother-in-law plant vegetables, which wasn't possible when she was running her wedding business at breakneck speed out of her Toronto studio.McKenna and husband Jeff Richards had been intrigued for years by a slower-paced life outside of the city. But it wasn't until COVID-19 brought their respective businesses "Richards is a chef" to a halt that the two moved from Toronto to the town of Grand Valley to live with his parents.THE CANADIAN PRESS/HO-Lexi McKenna MANDATORY CREDIT

TORONTO - Lexi McKenna's work day now includes breaks to help her mother-in-law plant vegetables, which wasn't possible when she was running her wedding business at breakneck speed out of her Toronto studio.

McKenna and husband Jeff Richards had been intrigued for years by a slower-paced life outside of the city. But it wasn't until COVID-19 brought their respective businesses - Richards is a chef - to a halt that the two moved from Toronto to the town of Grand Valley to live with his parents.

“We've kind of fallen in love with this small-town vibe,” McKenna said. “It's a really lovely community. There's a nice sense of security, and then honestly, the pace of life - I'm still getting work done here, but I just don't have this sense of urgency in everything I do that I do when I'm in Toronto.”

Since the global pandemic first forced Canadians into their homes in late-March, our houses have become our offices, our schools and our recreation centres. And we suddenly see our homes' shortcomings, and crave more beautiful scenery and space to roam.

That allure, along with the high cost of city living, and the new knowledge that many Canadians can work from home, has more people shopping for homes outside the city.

“In the last 10 days, we have seen an overwhelming migration of people up here,” Chris Keleher, a Royal LePage realtor who specializes in Collingwood and The Blue Mountains, said on Friday.

“The increase in buyer activity has been massive, and 95 per cent of the buyers my team is working with are families where the pandemic has finally been the straw that broke the camel's back, and they are moving out of the city.”

Keleher's clients Renee and Francis Tanaka are shopping in Collingwood, a virtual playground on the southern part of Georgian Bay with beaches, forests and Blue Mountain ski resort. Renee, who is a maternal support practitioner and Francis, a technical sales representative, want to be closer to family, plus provide more space for their two sons, aged three and six, to play.

“It's funny, because when we were up (in the Collingwood area) in the summer, our thought was always like: could we actually live up here?” Francis said.

“And the lifestyle outside of the city is much more appealing to us,” Renee added. “We have two active boys who are continuously wanting to play in nature. We are an active family, so by moving somewhere up north like Collingwood, we can ski, we can bike, we can hike, we have all of these things at our fingertips. We also can get more green space for our dollar.”

Royal LePage CEO Phil Soper said online viewership of Ontario listings outside of Toronto - in “exurban” regions - are on the rise.

Royal LePage numbers show Vaughan, just north of Toronto, saw an 83 per cent jump in May over the same time last year. Peterborough and Lindsay were up 56 per cent, and Kitchener and Cambridge saw an increase of 53 per cent.

Soper said the real estate market was already trending in this direction, driven both by the 5,000 baby boomers that retire each week, and millennials' desire for better housing bang for their buck.

“Forever people have thought 'Wouldn't it be lovely to live in the country with all its accoutrements, with the rush of the city behind us?”' Soper said. “So fast forward to now, I think what we're seeing is an acceleration of a trend that had already began.”

In some cases, such as McKenna and Richards who could no longer afford their $2,300-a-month Parkdale apartment, moving was a financial necessity.

“Once COVID happened, it became a very fast, downward sort of spiral in terms of Jeff was the chef of a great restaurant in Toronto and they were laying everyone off so he was out of work. . . And then I work in weddings, and the wedding season for 2020 is essentially becoming non-existent,” said McKenna, who co-owns Paper & Poste, which specializes in wedding stationery.

“Just two really unlucky industries to be a part of as a couple.”

McKenna said Richards had been “over Toronto for awhile” because of big-city inconveniences such as lack of parking.

She was more worried they would miss the perks of downtown living.

“But then as soon as it became something we had to do just to survive financially, first of all, I was kind of happy that the choice was taken away from me.

“I was like, this is just what we have to do now. I've really loved it since we've been up here.”

McKenna said they might eventually move closer to Toronto again, and that Hamilton is an option. But the longer they're in Grand Valley, she said, “the better we feel.”

“Sometimes people just need the right reason or the right motivation to do something they've always wanted to do,” Keleher said. “Now they have it.”

Home Group Realty's John Gaida moved to Erin, Ont., from the GTA with his wife in 2011. They live on a permaculture farm with a food forest, pigs and chickens on three acres of land.

Gaida, who's helped people from the GTA find homes in the Guelph area for years, said he's seen a bump in business since March.

“Where I've noticed it the most is the desirability of certain areas - houses that typically would have been deemed really desirable because let's say they were close to the highway for commuters to jump on and off. Now people are like, 'Our offices have said we are not coming back, so if we're going to be working from home, I want a property that I can actually enjoy versus just settling on this one because it's in a good location.”'

Gaida, who knew nothing about running a permaculture farm before he and his wife moved to Erin, added that the internet alleviates some of the fear of moving out of the city.

“Man, YouTube is amazing. Everything I've learned out on the rural property is like, 'screw it, I'll watch a YouTube video and I'll figure out how to kill a chicken,' or whatever it is. It's really interesting how having the available resources to have the knowledge there takes away the fear factor of actually potentially making a move. The mentality, has really shifted, people have a much higher threshold for new things and new adventures.”

This report by The Canadian Press was first published June 13, 2020.