COVID-19 infections in Toronto will exceed April peak in next few weeks, could get 'much worse' without new restrictions: de Villa

Toronto’s top doctor says that the city will see more COVID-19 infections in the next few weeks than it did during the peak of the first wave of the pandemic in April and she is warning that things will get “much worse” this winter without new restrictions to control the spread of the virus.

At a briefing on Wednesday afternoon, Medical Officer of Health Dr. Eileen de Villa shared new modeling which estimates the different number of infections that the city is likely to see over the next eight months based on when new actions are taken “to drive down transmission.”

The modeling suggests that if the city’s reproductive rate rises even slightly from 1.2 to 1.25 there could be more than 30,000 new infections over the coming months with a peak expected sometime between early March and early May.

De Villa, however, said that if measures are introduced to lower the reproductive rate to 1.1., the modeling suggests that there will only be a quarter as many new infections by May.

She also said that if the city is able to introduce measures that further lower the reproductive rate to 0.9, the outbreak would be “headed towards dying out” and the picture would improve some more.

For example, she said that in scenario in which new restrictions are put in place by the end of October to lower the reproductive rate to 0.9 the modelling projects that the number of infections amassed by May will end up being six times lower than it would be without any action. But if policymakers wait until the end of November to take action, it would only be three times lower. In the event they wait till the end of December, it would only halve the number of infections by May.

That, in turn, would mean a level of infection that would still put tremendous pressure on the city’s healthcare system.

“What we are trying to with respect to showing these models is give people a sense of what could the future look like depending on how much transmission of virus there is in our community but at the end of the day the level of virus transmission is up to all of us,” de Villa said during the briefing. “We know how this virus transmits, we know how it spreads and it spreads from person to person in close contact with each other through the droplets that you put out when you talk, breathe, sing or shout. So it up to us in government and the population as a whole to make sure we are doing what we can to reduce virus spread.” 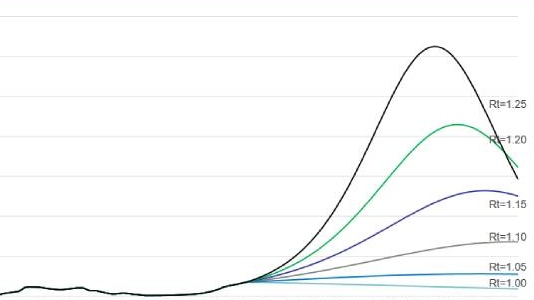 De Villa has called on the province to ban indoor dining at bars and restaurants and prohibit group fitness classes and sports activities that take place indoors, though Premier Doug Ford has so far refused to do so and has said he needs more “hard evidence” before taking “someone’s livelihood away from them.”

The modelling released on Wednesday is not based on any specific measures being taken to limit the spread of COVID-19 and de Villa conceded that it is largely “premised on assumptions” about the success of those measures in lowering the reproductive rate, which is a technical term that refers to the average number of people that each person infected with COVID-19 passes the virus onto.

“What the models show are what happens at different levels of the reproductive rate. What it takes to get to those different levels isn’t specifically named in the models. All we are doing is changing the level, presuming that actions have been taken to achieve those numbers,” she said. “What specific actions will take something from say 1.2 down to 1.1, I can’t say until we actually adopt the action and see what happens.”

Toronto has reported an average of 214 new cases of COVID-19 over the last seven days, which is the highest that number has been since April.

It has also seen its positivity rate rise to three per cent. It had dipped below one per cent as recently as August.