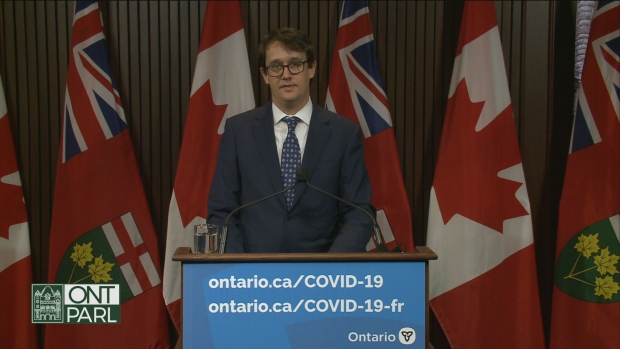 TORONTO - The next phase of Ontario's workplace “inspection blitz” is expected to focus on warehouses and distribution centres in Peel Region, a COVID-19 hot spot with a high number of essential workers.

He said employers who don't follow public health guidelines, such as physical distancing, screening for infection and mask-wearing, and fail to keep workers safe will be ticketed or shut down.

“Beefing up enforcement over the next number of weeks is vital,” he said in an interview. “I want to ensure that we're protecting every single worker in the province, including precarious workers, and every worker is protected under the law.”

Peel Region has maintained high rates of infection since last fall, though daily reported cases have declined since the start of the new year. The region, which includes Brampton and Mississauga, is home to a number of large distribution workplaces and factories, including several Amazon warehouses.

The local health unit has reported 257 workplace COVID-19 outbreaks since the pandemic began, with 21 total outbreaks at distribution centres.

McNaughton said pandemic safety inspections are zeroing in on such workplaces that employ a high number of temporary and precarious workers who have continued to work through the provincewide stay-at-home order.

“Peel Region, obviously, is a hot spot when it comes to COVID-19, and we're doing everything in our power to keep workers safe and workplaces safe,” he said in an interview.

Larger fines are possible for violations deemed “serious,” and McNaughton said a number of investigations are ongoing.

The Ministry of Labour reports that 218 tickets have been issued since inspections focused on big-box stores began last month.

The department noted on Wednesday that compliance with orders has increased by 19 per cent since the inspection blitz began.

Since March 2020, there have been 529 COVID-19-related visits to warehousing and storage sector work sites, with 320 tickets issued in total, according to the latest ministry figures.

No tickets were issued in the sector this year as of Wednesday, before the new wave of inspections was to begin in Peel.

McNaughton said inspections would continue as businesses reopen for in-person services over the next several weeks as Ontario gradually rolls back a provincewide stay-at-home order.