COVID-19 outbreak at Peterborough student residence now includes 44 cases, including 30 that have screened positive for variants 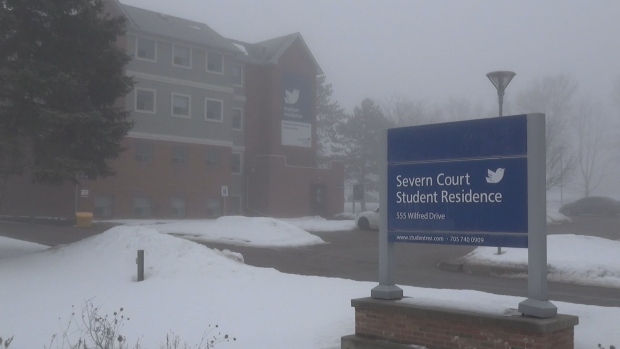 The Severn Court Student Residence in Peterborough is shown in this undated photo.

There are now 44 cases of COVID-19 at a student residence in Peterborough and officials are warning that the entire region is sitting “on the threshold” of being moved from the yellow zone into the red zone in the provincial framework.

An outbreak was first declared at the privately owned Severn Court Student Residence over the weekend.

On Thursday, officials confirmed that there are now 44 cases associated with that outbreak, including 30 that have screened positive for variants of concern.

They also said that there are another 40 “high-risk contacts” living at the residence who have not yet tested positive and 60 in the wider community.

“Our currently weekly incidence rate is already at 40 per 100,000 people, which does align with the red. So we have been sharing our local data with the office of the Chief Medical Officer of Health and we do expect to see a change into a more restrictive zone,” Dr. Rosana Salvaterra, who is the medical officer of health for Peterborough Public Health, conceded during a briefing on Thursday.

Officials have said that they believe that social gatherings may have been behind the spread of the virus through the Severn Court Student Residence, including one that took place on Feb. 20 just a few days after the stay-at-home order was lifted in the region.

So far no charges have been laid in connection with the gathering but police are conducting an investigation to determine whether it may have violated any orders under the Reopening Ontario Act.

The residence is mostly home to students from Fleming College and Trent University but is located off campus.

“There is a lot of misinformation and information that has been provided to try to distract any potential investigation. We definitely have to find out who was involved and to what extent and then at that point investigators will be able to determine who is responsible and potentially who may be charged,” Inspector John Lyons told reporters during Thursday’s briefing, noting that individuals who attended the party could face fines of $880.

Salvaterra previously issued a Section 22 order on Saturday requiring that any resident of Severn Court who either has a confirmed case of COVID-19 or is a close contact of a confirmed case remain in their rooms at all times, unless they are accessing kitchen and washroom facilities or seeking out medical care.

The order also requires that all other residents of the building remain in their rooms, with the exception of going out to pick up food and or medication.

In a statement provided to CP24 on Thursday, Fleming College President Maureen Adamson said that the school is currently cooperating with Peterborough Public Health and Peterborough Police as they investigate the situation at the residence.

But she said that once their investigation has concluded, the college will begin its own probe to determine whether any Fleming students violated the school’s code of conduct policy.

“If students are deemed to have violated their responsibilities, sanctions may be imposed that are fitting and appropriate to the seriousness of the behaviour and impact on the Fleming community. This will be determined on a case-by-case basis. Sanctions could be up to and including suspension or expulsion from the college,” she said. “Less severe sanctions could include behavioural contract, written reprimand or community services hours. No students have been suspended at this time.”

Peterborough Police Chief Scott Gilbert said on Thursday that neither Fleming College or Trent University deserve blame for what has happened at the residence.

He said that he believes it is an “isolated incident that unfortunately has had big repercussions in the community.”