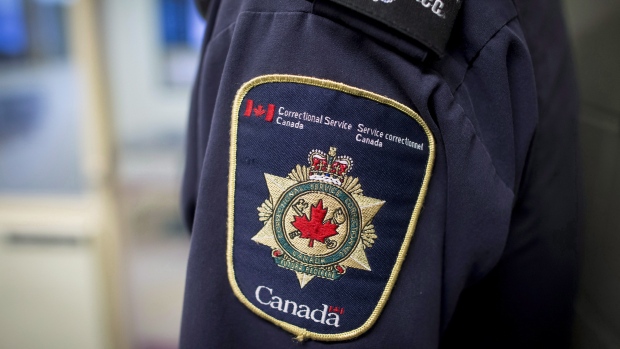 COVID-19 outbreaks in Canada's federal prisons have been declared over, and staff and visitors are preparing for 'a new normal' that could be in place for years. Patches are seen on the arm and shoulder of a corrections officer in the segregation unit at the Fraser Valley Institution for Women during a media tour, in Abbotsford, B.C., Thursday, Oct. 26, 2017. THE CANADIAN PRESS/Darryl Dyck

COVID-19 outbreaks in Canada's federal prisons have been declared over, and staff and visitors are preparing for a" new normal" that could be in place for years.

The prisons also banned visits from the public.

Despite precautions, the novel coronavirus spread behind bars.

"Out of our 43 institutions, we had five outbreaks since the beginning of the pandemic, which have now all ended," said Marie Pier Lecuyer, a spokeswoman for Correctional Service Canada.

"However, we continue to monitor the situation and diligently apply our safety measures and health protocols."

A total of 360 inmates in Canada tested positive for COVID-19, and two of them died. The hardest hit institution was at the Federal Training Centre Multi-level in Laval, Que., which reported 161 cases and one death. One inmate remains in hospital.

The Mission Medium Institution in Mission, B.C., had 120 inmates test positive. One of them also died.

Correctional Service Canada's website on Friday listed no active cases of inmates, but said results of five tests were pending.

As of Aug. 5, Lecuyer said 142 employees at the institutions had tested positive for COVID-19, and 139 have recovered.

About a third of inmates in Canada are housed in federal institutions with the remainder in provincial jails, where those on sentences of two years less a day mix with those awaiting trial.

An official with the Union of Canadian Correctional Officers said things are slowly returning to normal in prisons, but it will be a lengthy process.

Correctional Service Canada began the process of gradually allowing visits to inmates across the country a month ago, with strict health measures.

Before being allowed in, visitors must be screened and have their temperature checked. They're also required to wash their hands before entry, wear a mask and practice physical distancing. Visitor spaces are cleaned and disinfected before and after each visit.

"It really is what our new normal is," said Bloomfield.

"It's going to be restricted and very different. Previously, we never asked anybody if they had been out of province if they came in for a visit. We'd never taken anybody's temperature at the door," he added.

Bloomfield said stopping public visits to the federal institutions was necessary but unpopular with the inmates.

Visits are important because they allow inmates to maintain community and family contacts, he said.

"Having to restrict things like that is not taken lightly at all," Bloomfield said.

"It's not unlike the elderly in the seniors homes. ... They're locked away from people and nobody can visit."

This report by The Canadian Press was first published Aug. 8, 2020