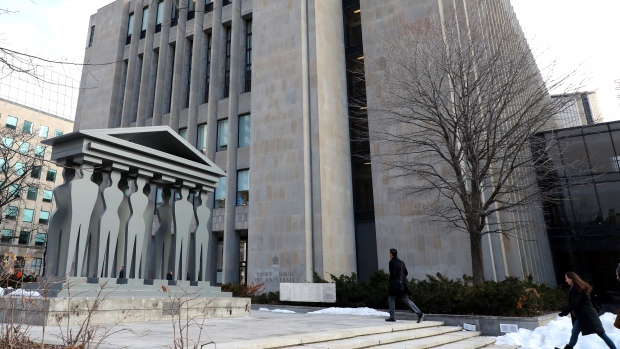 A shrill, persistent echo punctuated by loud beeps nearly derailed what is believed to be the first virtual murder trial in Ontario earlier this month.

Presiding over the virtual courtroom from his home, Ontario Superior Court Justice John McMahon attempted to fix the issue alongside lawyers and court staff as they waited for Michael Colatosti to appear by video conference from the Toronto South Detention Centre.

“For whatever reason, this is not working right now,” an exasperated McMahon said a few minutes later, ready to call it a day.

In the end, a suggestion from the defence - that everyone mute their phone and computer microphone - resolved the problem and allowed the hearing to move forward, despite a few more technological glitches.

With jury trials on hold and all in-person court operations shut down for months, the COVID-19 pandemic has forced Ontario's justice system to rapidly modernize, fast-tracking changes many in the legal field have championed for years.

While switching to virtual hearings and electronic filing has brought its own set of growing pains and raised concerns over privacy and transparency, participants at all levels of the justice system say there is no returning to an antiquated, paper-based model once the COVID-19 restrictions are lifted.

And they stress technology will play a crucial role in tackling the massive backlog of cases the province's already overburdened courts will face when normal operations resume.

“I don't think anyone should want to return to what was normal, because what was normal was really outdated, inefficient and costly,” said Ottawa defence lawyer Michael Spratt.

He described a system “stuck in the 1970s or 80s”: still heavily reliant on fax machines and physical media such as CDs, where lawyers often have to travel more than an hour to submit documents in person or attend a judicial pretrial that lasts only minutes.

It wouldn't be practical or appropriate to carry out complex matters, where witnesses need to be cross-examined and assessed for their credibility, over phone or video conferencing, but using technology for routine matters could save a lot of time and energy, he said.

Cases such as Colatosti's, who was charged with first-degree murder in the death of his grandmother and attempted murder in an attack on a personal support worker, are a good example of what can continue to be handled remotely when the pandemic abates, Attorney General Doug Downey told The Canadian Press this week.

His office approved the trial to proceed before a judge alone, though murder cases typically must be heard by a jury. The Crown and defence also jointly submitted Colatosti should be found not criminally responsible due to a major mental disorder at the time, a submission the judge accepted.

The pandemic provides “an opportunity to look at not just how we do things but why we do things,” Downey said.

It's clear the system needs to dramatically cut down on paper, Downey said. The province has leased 600 laptops to help during the crisis, setting them up with a virtual private network and digital recording devices, he said.

“We've armed everybody with the tools,” he said. “I like to say we've modernized the justice system 25 years in 25 days.”

The attorney general recently announced $1.3 million in funding for technology to help courts and tribunals transition to remote operations during the pandemic.

Others in the justice system say consistent funding will be required to build on this progress, adding spending restrictions and red tape are part of what has kept the courts locked in the past.

The slow pace of modernization in Ontario courts has long been a target of criticism, with the province's auditor general repeatedly zeroing in on outdated technology as hampering court efficiency.

In her latest annual report, Bonnie Lysyk found paper made up more than 96 per cent of the documents filed in Ontario's court system in 2018-19.

Had electronic filing been embraced earlier, it would have greatly softened the shock of COVID-19 on the courts, said Scott Maidment, a longtime litigator and member of a newly formed task force on virtual court hearings.

The group, dubbed the E-Hearings Task Force, was formed to help the courts adapt to the crisis. Its objectives include establishing best practices for virtual hearings and identifying a suitable electronic platform, Maidment said.

Several platforms, including the video conferencing app Zoom, have been used so far, he said.

The task force requires that any platform selected be user-friendly, reliable and capable of handling several simultaneous uploads and downloads, he said. It must also be able to protect confidential information while remaining open to the public, he said.

Part of the problem until now, Maidment said, is that it was difficult for many, including governments, to imagine a system different from what was in place.

“Well it's not going to be necessary anymore to imagine what a virtual hearing looks like, because almost every lawyer and judge is going to have done one. And once they begin to see that it is workable and they become familiar with it, I think they will want to use it for some things,” after the restrictions are eased, he said.

Though video recording and photography are prohibited in Ontario courthouses, the Divisional Court recently held what is believed to be the province's first livestreamed hearing, which could be viewed on a designated YouTube channel.

The Ministry of the Attorney General could not immediately say whether other hearings had since been livestreamed.

Currently, any member of the public who wishes to attend a virtual hearing before the Superior Court must first contact the court. Experts have raised concerns that virtual hearings may not be accessible to the public, presenting a challenge to the fundamental principle of open courts.

Ontario's chief justice of the Superior Court, Geoffrey B. Morawetz, highlighted the open courts principle as one of several top priorities in discussing the transition to virtual operations during a livestreamed event for the legal industry earlier this month.

Meanwhile, Spratt, the defence lawyer, said he hopes the disruption caused by the pandemic will also spur those in the legal field to rethink other key aspects of the justice system.

“COVID has proven that we have...too many individuals who are in jail waiting for their trial, and likely too many matters before the courts, period,” he said, noting the courts have historically been used to deal with social issues such as poverty, addiction and mental health.

“So one of the silver linings may be that the justice system, out of necessity, finally is forced to grapple with important questions of what should actually be before the courts and what matters we should be subjecting to a very expensive, lengthy and punitive justice system.”

This report by The Canadian Press was first published on April 29, 2020.