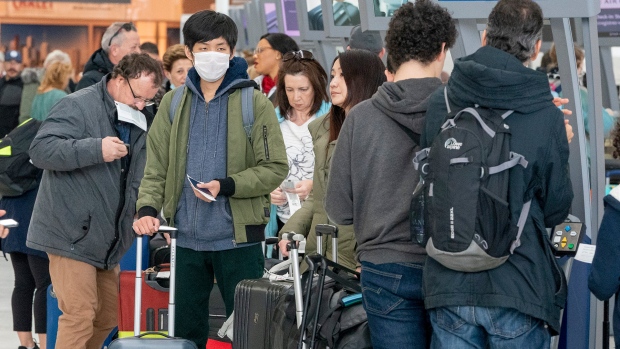 Passengers check in for their flights at Pearson Airport in Toronto on Friday, March 13, 2020. THE CANADIAN PRESS/Frank Gunn

OTTAWA -- The economic and life disruption caused by the COVID-19 pandemic has prompted some recent immigrants to leave Canada and return to their countries of origin, where they have more social and family connections.

The number of permanent residents who have been in Canada for less than five years declined by four per cent to 1,019,000 by the end of 2020 from 1,060,000 the year before, according to an analysis of Statistics Canada's labour force survey that measures the number of workers between 15 and 65 years old by their immigration status.

The number had grown three per cent a year, on average, in the previous 10 years.

“It's actually not uncommon to have immigrants go back to their home country during the recessionary periods,” said Robert Falconer, a researcher at the University of Calgary School of Public Policy.

“If they've lost their job, they can go and live with their family and not pay rent. They can maybe find some social connections and work back home.”

He said the number of new immigrants fell by about three per cent between 2008 and 2009 during the financial crisis and the recession that followed.

He said many of those who have left in the past year might not come back if the economy doesn't recover quickly.

“The longer they stay at home in their home countries, the less likely they are to come back to Canada.”

A study by Statistics Canada released in August showed that in the early months of the pandemic, recent immigrants to Canada were more likely than Canadian-born workers to lose their jobs, mainly because they had held them for less time and, as a whole, are overrepresented in lower-wage employment. That includes in service-sector jobs.

Julien Berard-Chagnon, an analyst with Statistics Canada, said the agency doesn't keep a monthly count of immigrants who leave the country but a group of its analysts are now working on a paper to examine the issue during COVID-19 pandemic.

“The literature signals that immigrants, especially recent immigrants, are more likely to emigrate than the Canadian-born population,” he said.

While the pandemic has also driven down immigration to Canada by about 40 per cent in 2020 compared to 2019, the Liberal government announced in October that Canada is seeking to admit upwards of 1.2 million new permanent residents in the next three years, including 401,000 this year.

But this number seems optimistic as travel restrictions and the sharp economic downtown remain.

“I doubt they will hit their target this year,” Falconer said.

A spokesman for Immigration Minister Marco Mendicino said the government is very confident it will meet it immigration targets in the next three years.

“In January 2021, we welcomed more new permanent residents than in January 2020, when there was no pandemic,” Alexander Cohen said in a statement.

“We're already ahead of schedule, welcoming new permanent residents at a rate 37 per cent higher than our projections.”

Falconer said the government is focusing on transitioning temporary residents in Canada to permanent status.

“It's the best thing to do for people who are living here,” he said. “But in terms of this population growth, it's a wash, meaning that we're not actually increasing our population.”

He said this policy is necessary but not sufficient to help the government meet its high immigration target this year.

“Not every temporary resident wants to become a Canadian permanent resident or Canadian citizen. Some of them are here to work, to study and they are perfectly happy to go back home.”

He said the incentive for the government is still to try to increase immigration numbers, especially in jobs related to health care and technology because having fewer immigrants will harm these two sectors more than others.

Andrew Griffith, a former director of citizenship and multiculturalism at the Immigration Department, says immigrants who arrive during an economic downturns tend to suffer economically, at least in the short term, more than those who arrive when the economy is growing.

He said maintaining high levels of immigration at a time when the economy is weak and sectors such as hospitality, retail and tourism are devastated has an element of irresponsibility.

He said the government needs to put more focus on immigrants who are already here as we face structural change in sectors including hospitality, travel and service industries that will affect mostly women, visible minorities and recent immigrants.

“We may be in a fairly structural shift that will eliminate some jobs or dramatically reduce some jobs, and then what kind of retraining programs or other programs we need to support people as they transition.”

Cohen said the government has invested in settlement services during the COVID-19 pandemic by increasing funding to help boost wages by 15 per cent. It has helped buy personal protective equipment to keep staff safe, as well as cellphones and laptops to ensure services, including language training and job-search help, can be offered remotely.

Falconer said the government should address problems with licensing and professional development that many newcomers face in Canada.

“We make it very, very difficult for somebody who worked in a profession in their home country to come here and work in the same profession.”

“Immigrants come here with aspirations or hopes of being able to work and earn a much better living here in Canada than they did in their home country and they discover that they're actually going to be working in an unpaid, underemployed job.”