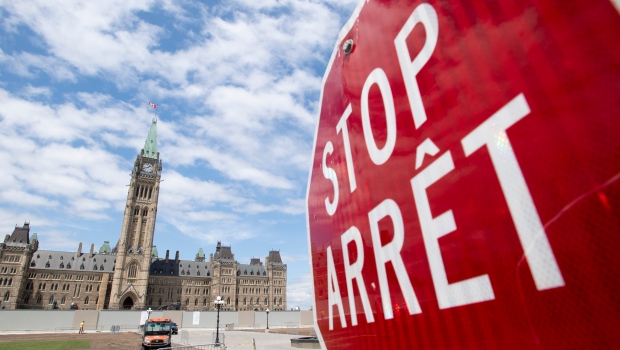 Construction is ongoing on the front lawn of the Parliament buildings in Ottawa, Tuesday, June 30, 2020. Canada Day celebrations on Parliament Hill were cancelled this year due to the COVID-19 pandemic. THE CANADIAN PRESS/Adrian Wyld

OTTAWA - Large celebrations were replaced in many parts of the nation with backyard gatherings and digital events as Canadians marked a Canada Day unlike any other in the country's 153-year history.

It has been almost four months since governments ordered businesses closed and urged Canadians to stay home to slow the spread of the novel coronavirus with restrictions only recently being eased.

Heading into Canada Day, the country had 104,204 reported cases of COVID-19, including 8,591 deaths and 67,954 recoveries, based on figures updated late Tuesday by the Public Health Agency of Canada.

Millions have either lost their jobs or seen cuts to their earnings, while government spending has skyrocketed to provide emergency relief - planned federal spending alone now tops $174 billion. Demand has also jumped for social services, such as food banks.

Prime Minister Justin Trudeau spent part of his morning with his family harvesting broccoli at a farm operated by the Ottawa Food Bank.

The organization said demand has levelled out since an initial surge, but it now expects another large spike in need once recipients max out payments through the $80-billion Canada Emergency Response Benefit.

Speaking afterward, Trudeau noted the difficult circumstances many people found themselves in this year, such as families separated from loved ones, including front-line health workers.

He noted a Canada Day one year into the Second World War when there was a message of hope and opportunity for the country in the face of a crisis.

“That was the reality our parents and grandparents were called to face. That was the challenge to which they rose and this is the country they built,” Trudeau said, standing alongside his wife, Sophie Gregoire Trudeau.

“On this Canada Day, it is our turn. We must now restart and rebuild a Canada for the 21st century.”

That included ongoing efforts at reconciliation with Indigenous Peoples. Assembly of First Nations National Chief Perry Bellegarde called on the country to work as one to close gaps that exist between Indigineous and non-Indigenous people.

“This is a collective challenge, one that I feel Canadians are embracing,” he said in recorded remarks. “I have faith that our best days as First Nations and as country are ahead of us.”

April's mass shooting in Nova Scotia and the need to address systemic racism marked Gov. Gen. Julie Payette's Canada Day message. She spoke about her confidence in Canadians to heed the lessons of 2020 and not remain indifferent to multiple challenges.

“That will build on our ability to act collectively, to act as one for the good of all,” Payette said.

Many of the statements would have been delivered in-person, instead of by video, but the pandemic forced the cancellation of high-profile events like the annual pomp and pageantry on Parliament Hill in favour of online offerings to keep crowds from gathering.

The Ottawa show was streamed live and virtual fireworks at night as part of a buffet of digital activities Canadian Heritage curated. The 53 bells of the Peace Tower still rang, with two special recitals streamed live.

Federal officials began reshaping the annual celebration months ago, knowing that construction on the iconic Centre Block would force a change from the schedule in recent years where artists performed on a large stage set up on Parliament Hill.

As some of that work was underway, COVID-19 forced what Heritage Minister Steven Guilbeault said was a radical rethink of how to host the musical shows.

“We're hoping Canadians will enjoy it a lot because they've made a lot of sacrifices in the last few months,” Guilbeault said in a morning interview.

Some of the elements provided online could stay in place for future Canada Day festivities, particularly to help connect people who are far apart, he said.

The physical distancing measures recommended by public health officials, the lockdowns and orders to wear masks indoors from some jurisdictions have also sparked some backlash.

A group of demonstrators gathered on Parliament Hill to denounce those measures, which they called an infringement of their civil liberties. Many chanted anti-Trudeau slogans while not wearing masks. Similar demonstrations were planned in other locales.

In some parts of the country, crowds were allowed to gather for actual fireworks displays, including in Alberta where up to 200 people could gather for audience-type outdoor community events such as fireworks and festivals.

Meanwhile in Toronto, police said people had gathered at the city's waterfront, apparently in anticipation of a fireworks show that had been cancelled due to the pandemic.

“Right now, it is our actions, and our actions only, that will reduce the spread,” Canada's chief public health officer Dr. Theresa Tam said in a statement Wednesday.

“Let's stay on course and win this marathon together - for Canada.”

This report by The Canadian Press was first published July 1, 2020.