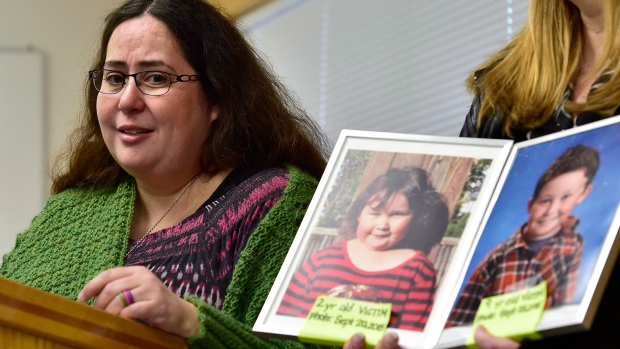 Jennifer Neville-Lake speaks to media as a supporter holds a photo of her late daughter Milly, left, and son Daniel, during a press conference following Marco Muzzo's parole hearing, at the Beaver Creek Medium Institution, in Gravenhurst, Ont., Wednesday, Nov. 7, 2018. A panel with the Parole Board of Canada says Muzzo has not addressed his alcohol misuse, and denied him both day parole and full parole. THE CANADIAN PRESS/Frank Gunn

Jennifer Neville-Lake what remains of her family will not be allowed to attend an upcoming parole hearing for the man convicted of killing her father and three children due to measures enacted to stop the spread of COVID-19 in prisons.

Parole Board of Canada spokesperson Cindy Golemiec tells CP24 no observers, including the families of victims of an offender’s crime are allowed to attend hearings at this time. Marco Muzzo’s hearing is scheduled for April 28.

“In an effort to protect the health and safety of the public, Parole Board of Canada (PBC) Board members, staff, and inmates in response to the COVID-19 pandemic, the PBC has cancelled all observer attendance at its hearings until further notice,” she said. “This is consistent with the decision of the Correctional Service of Canada (CSC), which has also suspended all visitors from attending its institutions.”

Neville-Lake’s mother and grandmother were also seriously injured in the crash.

Muzzo, whose family’s construction business is worth more than $1 billion,  was returning from Pearson Airport at the time, where he had recently landed in a private jet after celebrating his bachelor party in Miami.

A toxicology report submitted during his sentencing said he was about three times over the legal limit when the collision occurred.

He was sentenced to 10 years in prison in April 2016. He was granted temporary unescorted absences from prison in 2017 and denied parole on his first attempt the following year.

The board ruled then that Muzzo had not properly addressed his alcohol abuse issues while confined.

While Neville-Lake will still be able to submit a statement to be considered by the board at the hearing, it is not likely Canada’s COVID-19 outbreak will be sufficiently resolved in time for the end of the month.

“This is a temporary measure in response to the current COVID-19 pandemic, and the Parole Board of Canada will be reassessing this situation on an ongoing basis,” Golemiec said.

The Board also said it could provide an audio recording of the proceedings to Neville-Lake.