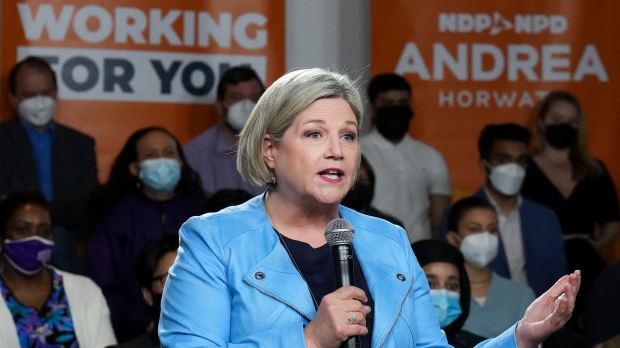 With two weeks to go until election day in Ontario and advance polling now under way, this campaign had a lot of the energy sucked right out of it on Thursday.

Two of the leaders were forced off the campaign trail and into isolation after testing positive for COVID-19. Green Leader Mike Schreiner fired up his virtual links and told CP24 he tested positive on Wednesday evening but said “I’m feeling fine.” Andrea Horwath of the NDP also sent out a release early this morning, confirming she too tested positive.

Both leaders moved their campaigns to their screens and say they will try to keep campaigning and getting their message out to voters. For the most part election campaigns focus on the leaders. The party strategists build their campaigns around the leaders. With Schreiner and Horwath limited to online campaigning for the next few days all the pre-election planning is out the window. The scramble to find new ways for the NDP and Green Leaders to connect with voters will be job one for those campaigns.

On Thursday afternoon, the NDP were first off the mark with a policy headline that might help blunt the absence of their leader. The party is now committing to taking off tolls for truckers on Hwy 407. This new announcement is not in the party platform. The NDP release featured quotes from its candidates in Brampton – key ridings the party needs to win on June 2.

All the polls indicate the Progressive Conservatives’ lead appears to be holding up. With a solid lead the PCs are keeping Doug Ford’s campaign appearances to a minimum. Again on Thursday he had only one public event on his schedule. In Niagara Falls, Ford stuck to his campaign theme to keep building but turned from highways to a bridge. Ford repeated lines from the April budget that a new Tory government will “twin the Garden City Skyway,” which connects St. Catharines and Niagara-on-the-Lake. Ford provided no timeframe for completion of the project.

Caitlin Clark, with the PC election communication team, sent a one line email response to my question about the debates.

“Our candidates are campaigning hard in their ridings to earn the trust of voters for our plan to get it done. Some candidates have chosen to participate in all-candidates forums and others have chosen to spend their time taking their message directly to voters at the door,” she said.

The one leader on Thursday campaigning hard was Steven Del Duca. It was another day in the Greater Toronto Area with stops in Mississauga and Brampton. Day after day the Liberals are sticking to the affordability issue and campaigning in ridings in the critical GTA suburbs.

COVID-19 has taken a lot of the pizzazz out of the Ontario campaign. The nightly rallies of campaigns past are gone. Even the lunch time restaurant pit stops are few and far between. Look for the campaigns to ramp up television ads to try and make their case to voters in the last days of the campaign.