The CP24 Breakfast Traffic and Safety Specialist signed off for the last time on Thursday, saying goodbye to all viewers that have tuned in to watch him cover breaking news on weekday mornings for more than a decade.

Known for his comprehensive knowledge of traffic safety, his wit, humour and spontaneous dance moves, Woolley will surely be missed by his CP24 colleagues and viewers.

During his final shift Thursday morning, Woolley thanked all the viewers for their support throughout his broadcasting career.

“I do want to thank the viewers that have been listening in this morning. They often come visit us wherever we are and they’ve really made it interesting because it’s sort of a one-way conversation and I do appreciate the folks when they do come up and say hi,” Woolley said.

Prior to joining CP24, Woolley was a member of the Ontario Provincial Police for 30 years, retiring as a sergeant in the Highway Safety Division in September 2008.

During his time in the OPP, Woolley specialized in traffic crime and collision investigations and enforcement, and was the lead investigator on several high-profile fatal motor-vehicle collisions in the Greater Toronto Area.

While at CP24, Woolley reported on all types of news from shootings, motor-vehicle collisions, city hall, and for over a year, extensive coverage on the COVID-19 pandemic. 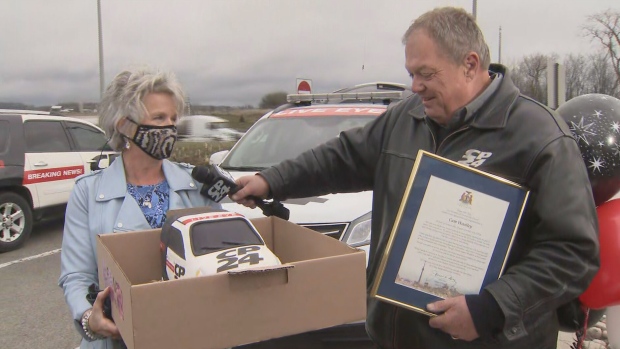 Toronto Mayor John Tory presented Woolley with a plaque from the city on Thursday, congratulating him on his service at CP24.

Tory said Woolley was a great broadcaster because he was genuine, informed and provided humour in appropriate circumstances.

“He is authentic. There is only one Cam Woolley. Cam Woolley is Cam Woolley. And he’s a great guy, he’s been a great reporter, he was a great police officer, and I’m sure whatever he does, whether it’s speed boating or anything else, he’ll be good at that too,” Tory said in a video on Twitter.

After 43 years of working, Woolley said he plans to enjoy retirement with his wife April, and will keep busy by fixing up some cars and going for boat rides.

“It’s the first time I really had any time off. My wife and I have been married well over three decades, we’ve never had more than two weeks vacation. I worked pretty much straight for 43 years so kind of looking forward to taking it easy for a bit,” he said.

CP24 is owned by Bell Media.

Below are some tweets congratulating Woolley on his retirement:

Sending my very best to Cam Woolley as he hangs up his hat after a long career of service.

Decades with the @OPP_News, 13 years with @CP24 and now, embarking on his next chapter: speed boating.

After a long career with the OPP, and well known as a Highway Safety Division media officer, followed by a career as a CP24 breaking news journalist, congratulations on your 2nd retirement Cam Woolley. Thanks for keeping us all informed over the years! We wish you all the best! pic.twitter.com/WCrkgvhkUU

CP24 reporter Cam Woolley signed off for the last time on Thursday for retirement.

CP24 reporter Cam Woolley and his wife April on his last shift before retiring.