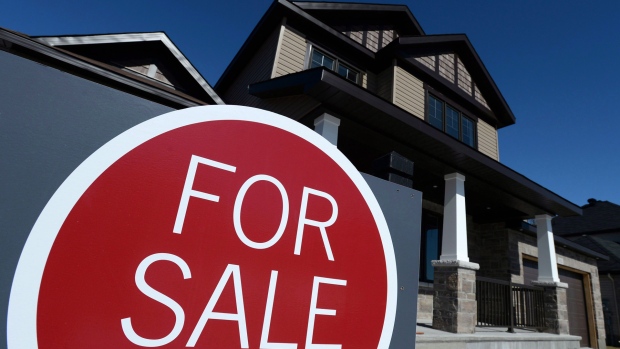 The Canadian Real Estate Association says September home sales edged up on a month-over-month basis for the first time since March.

The association said Friday that home sales for the month amounted to 48,949, their second-highest ever for September and a 0.9 per cent increase from 48,498 in August.

Fifteen of the 26 markets CREA tracks saw a rise in sales in September.

However, sales were down 17.5 per cent from September 2020, when a record was reached for the month.

The numbers indicate that the country's housing market remains strong because the level of sales in September were still about 10 per cent above pre-COVID levels and 16 per cent higher than the average set over the last decade, said Robert Kavcic, a senior economist at BMO Capital Markets.

“One can't help but feel as though the Canadian housing market is walking on tinder again, with demand holding at historically high levels, listings getting quickly absorbed, and price growth running steady near a 20 per cent pace,” Kavcic said in a note to investors.

His comments came as CREA said the number of newly listed properties in September totalled 65,211, a 1.6 per cent fall from 66,293 in August.

Excluding sales in Greater Vancouver and the Greater Toronto Area, two of the country's busiest and most expensive markets, cuts more than $146,000 from the national average price.

“There has been no relenting in price pressure,” Kavcic said. “In fact, the dial might be turning hotter again as we speak.”

The Multiple Listing Service Home Price Index, he pointed out, rose 21.5 per cent year-over-year, which is down from its 2020 high of 24.7 per cent.

“However you want to dice it, the broad Canadian housing market appears to be operating with 15 per cent to 20 per cent price growth, and no sign of cooling down,” he said.

CREA found year-over-year price growth is creeping up above 20 per cent in B.C., though it is lower in Vancouver, and said such gains are in the mid-to-high single digits in Alberta and Saskatchewan and low double-digits in Manitoba.

Ontario saw year-over-year price growth hit about 25 per cent in September, New Brunswick is just above 30 per cent and Newfoundland and Labrador sits at roughly 12 per cent.

Despite the price growth, CREA's senior economist saw some positivity in the numbers.

“The small changes observed in most key housing market metrics over the last couple of months suggest that the worst of the pandemic-related volatility we've experienced since last spring is in the rear-view mirror at this point,” Shaun Cathcart said in a statement.

“Having said that, given we are still stuck at around two months of inventory nationally, the thing to keep a close eye on going forward will be the behaviour of prices.”