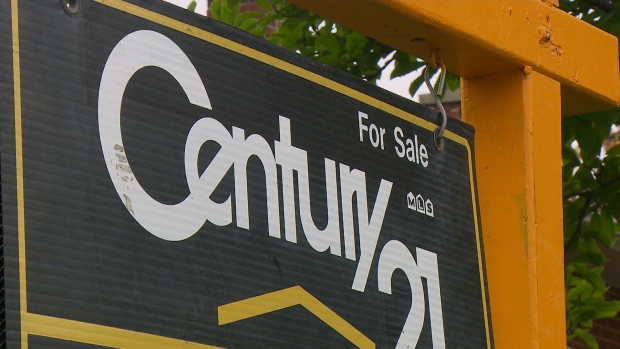 Canadian home sales nosedived in March as the COVID-19 pandemic began to take hold and caused both buyers and sellers to pull back.

The Canadian Real Estate Association said Wednesday that home sales last month were down 14.3 per cent compared with February, on a seasonally adjusted basis.

The drop marks an abrupt downward shift from what was expected to be a busy spring for home sales.

“March 2020 will be remembered around the planet for a long time,” said association president Jason Stephen in a statement.

“After Friday the 13th, everything went sideways.”

Restrictions on physical distancing and the closure of non-essential businesses began in the middle of March in a bid to slow the spread of COVID-19.

While realtors have been designated as essential services, real estate boards have urged increasingly stringent measures to avoid in-person activity as much as possible.

Home sales for March were still up 7.8 per cent compared with a slow March a year ago, but CREA noted that figure contrasted with a year-over-year gain of close to 30 per cent in February.

The March numbers also only started to drop near the end of the month, said CREA senior economist Shaun Cathcart.

“The numbers that matter most for understanding what follows are those from mid-March on, and things didn't really start to ratchet down until week four. Preliminary data from the first week of April suggest both sales and new listings were only about half of what would be normal for that time of year.”

The drop in sales activity varied by region, with Calgary marking a 26.3 per cent decline, the Greater Toronto Area sales down 20.8 per cent, Montreal down 13.3 per cent, Ottawa down 7.9 per cent, Greater Vancouver off 2.9 per cent, while Regina actually saw a 7.1 per cent sales gain.

Excluding the Greater Toronto Area and Greater Vancouver, two of the country's most active and expensive housing markets, the average price was about $410,000.

The sales-to-new-listings ratio slipped to 64 per cent from 65.4 per cent in February, a relatively small change given what's going on, said Dominion Lending chief economist Sherry Cooper in a note.

“While this is down slightly, the bigger picture is that this measure of market balance was remarkably little changed considering the extent to which current economic and social conditions are impacting both buyers and sellers.”

She said that with the market still largely balanced for March, the impact on housing prices will likely take a little longer to become apparent.

“Clearly this is only the beginning, but the plunge in sales and new listings in the second half of March is indicative of the stall out in housing market activity likely until social distancing is removed and people feel safe enough to resume normal activities.”

Activity could, however, then rebound fairly sharply if physical distancing measures are lifted by the end of June, said Royal LePage Canada president Phil Soper.

“Unlike, say, restaurants, where you'll never make up for a month of zero sales, in the real estate industry, bad weather, a short term economic shock, regulatory change, can shift the pattern of transactions from one quarter to the next.”

He said he doesn't expect a full rebound in sales this year, but that a lot will depend on what kind of knock-on effects the business restrictions end up having on the economy.

“The question is, will the severe downturn in the second corner carry on for the full year and I just don't believe it will, I believe some of those transactions, a significant number will be pushed into the third and fourth quarters.”

He noted that most job losses to date have been with younger and part-time workers who are less likely to be in the housing market, while the potential drop in immigration levels could also have a more muted impact because newcomers generally take several years to enter the market.

If physical distancing measures however stretch on past June then the realtor agency forecasts that it could put pressure on the market and prices could decline.

CREA, meanwhile, has held off on any revisions to its 2020 outlook, which in December called for an 8.9 per cent rise in sales to 530,000 homes, because there is too much still unknown, said spokesman Pierre Leduc.

“As the Bank of Canada said this morning 'the outlook is too uncertain at this point to provide a complete forecast',” he said by email.

“There isn't enough data and way too much uncertainty to determine any trends moving forward. It will be near impossible to do so until containment measures are relaxed.”

This report by The Canadian Press was first published April 15, 2020.