Firefighters battled a massive fire that broke out at a propane facility in Barrie Friday afternoon, prompting the evacuation of several homes and businesses.

Barrie Fire and Emergency Service (BFES) were called to Superior Propane, in the area of Bayview Drive and Lockhart Road, just before 2 p.m. for reports of a propane explosion.

When crews arrived, they faced heavy flames and smoke.

Images and videos posted to social media show flames shooting out in the air and a large plume of black smoke billowing into the sky. The thick smoke could be seen throughout the city. 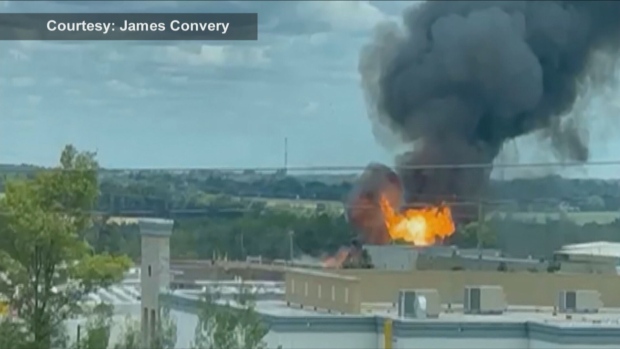 The fire is now under control. Deputy Fire Chief Ed Davis said there is still fire at the loading dock, where some smaller propane tanks, possibly barbecue tanks, exploded.

Firefighters also continue to pour water on the larger propane tanks to cool them.

"They are focused with maintaining large streams of water on those tanks. We're going to keep it on for a while," Davis said.

"We're actually gauging the temperature of the tanks to make sure that we're in a proper safe environment. So, we'll keep the water application to those tanks for now." 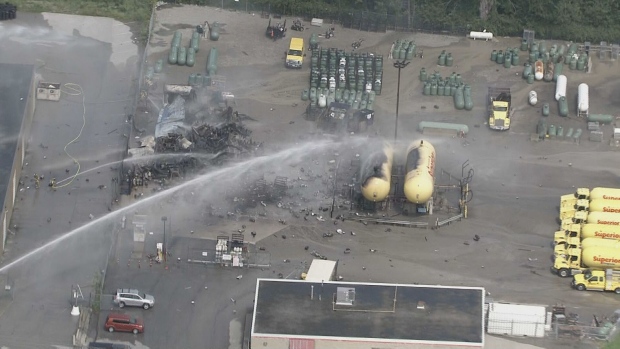 Davis said no one was injured in the fire. There were two employees at the facility at the time, but they safely got out.

He said the staff were able to shut off the system and stop the flow of propane.

"That was a good part on their end," he said.

When asked if there was an explosion before the fire, David said it will be part of the investigation.

Businesses and homes within one kilometre of the fire were evacuated as a precaution.

The Ontario Fire Marshal has sent two investigators, a forensic engineer and an emergency preparedness and response unit specialist to assist Barrie Fire in determining the cause of the explosion.

- with files from CTV Barrie