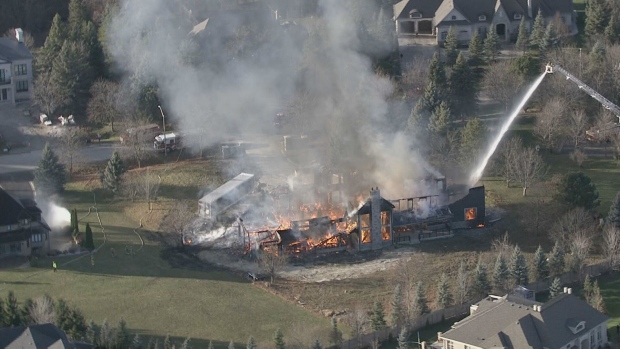 Fire crews are battling a blaze at a home in Vaughan. (Chopper 24)

A house under construction in Vaughan has been destroyed after a two-alarm fire Thursday afternoon.

Fire crews were called to a residence on Greenbrooke Drive, in the area of Weston and Teston roads, around 3 p.m.

When firefighters arrived, the home was fully engulfed in flames. A plume of smoke could be seen from kilometres away.

He said there are no reported injuries.

Just before 4:30 p.m., the fire had been contained, and firefighters are now putting out hotspots, Doyle said.

The cause and origin of the blaze are unknown.

Ontario's Officer of the Fire Marshal has been called to investigate.