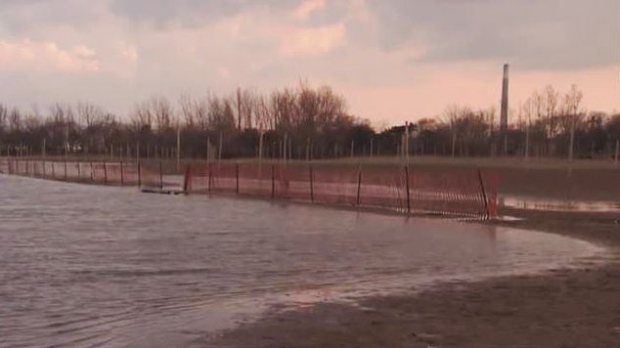 The city's main priority is protecting the Leuty Lifeguard Station, which is a heritage structure, and the boardwalk. (CP24)

A new lake has sprung at Ashbridges Bay Beach.

A large quantity of water pooled on the beach is encroaching on some of the park’s iconic and vital features, including its volleyball courts and a portion of the boardwalk.

This is the worst flooding that one of the city’s most popular parks has experienced in the last 50 years, Toronto Parks, Forestry and Recreation said.

“Ashbridges flooded as a result of waves from recent storms,” said Matthew Cutler, a spokesperson for Toronto Parks, Forestry and Recreation. “These kinds of changes in the waterfront are quite natural.”

The creation of a new inner lake on the waterfront of Lake Ontario has city and conservation staff working to ensure the safety of surrounding structures.

Their main priority is protecting the Leuty Lifeguard Station, which is a heritage structure, and the boardwalk.

“Once we’ve completed this work, we and the Toronto and Region Conservation Authority will revisit the broader issue to determine next steps,” he explained.

This isn’t the only area of the beach being overrun by water.

Around a third of the area where the volleyball court sits is underwater.

According to Cutler, 30 years ago these courts were a bay and part of Lake Ontario.

With the Ashbridges Bay Volleyball programming not scheduled to start until May 8, Cutler is hopeful “the water will evaporate and retreat over time” with warmer weather expected in the next few weeks.