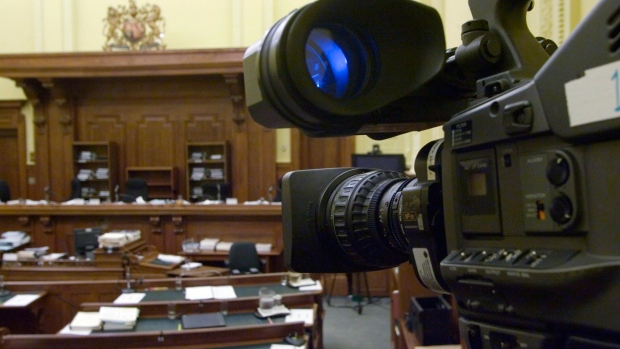 A television camera looks out over the courtroom during a break in a case at the Ontario Court of Appeal in Toronto, Wednesday Jan. 31, 2007. THE CANADIAN PRESS/Adrian Wyld

TORONTO -- Crown attorneys in Ontario want to delay returning to courthouses next week over fears related to COVID-19, the lawyers' union said in court documents.

The Ontario Crown Attorneys Association is seeking an injunction to delay the province's plans to reopen 44 courthouses starting next week.

The association alleges the province's attorney general, and the management board of cabinet that represents Crowns in labour relations, have not taken every precaution to protect workers in courthouses during the pandemic.

“These precautions include the mandatory wearing of masks and other administrative measures to protect the employees and other persons against contracting the virus,” said a notice of application filed in the Superior Court of Justice on Friday.

The union said the attorney general is breaching the Crowns' collective agreement by ordering workers to return to court on July 6, when it plans to reopen 149 courtrooms at 44 courthouses across the province for in-person trials. The union wants the delay so the issue can be dealt with by an arbitrator.

The attorney general's office said the health and safety of all court participants is its top priority.

“Everyone who visits a courthouse will be required to wear a face covering and will be screened for COVID-19 symptoms.”

She said there will be physical distancing markers and hand sanitizer dispensers in place, along with enhanced cleaning and room capacity limitations, upon the resumption of court.

Crognali said her office had yet to be served with the injunction application from the Crowns association.

On March 17, the Superior Court moved to remote appearances while the lower provincial court did the same on March 27.

The ministry plans to resume court in a phased approach that begins with some in-person hearings next week, according to a notice on June 25 by Superior Court Chief Justice Geoffrey Morawetz.

“Trials and other hearings that are urgent or which were scheduled to be heard during the suspension of the court's regular operations will be given priority,” Morawetz wrote.

Jury matters will continue to be deferred until at least September.

Morawetz wrote that the court and the ministry are exploring the idea of off-site jury selection. The number of people inside courts will also be limited, he wrote.