Cyclist critical after being struck by vehicle in Etobicoke 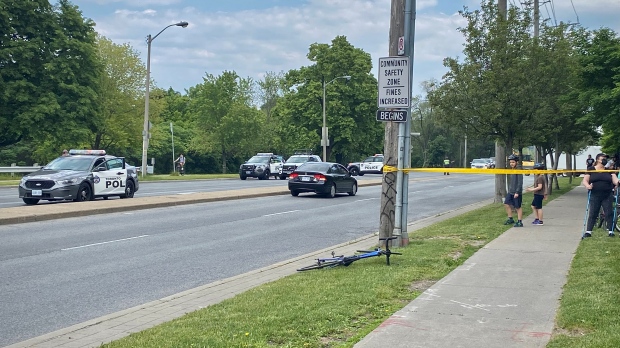 Police are investigating after a cyclist was struck by vehicles in Etobicoke. (CP24/Kenneth Enlow)

A cyclist is in critical condition after being struck by a vehicle in Etobicoke Friday afternoon.

Police and paramedics were called to Eglinton Avenue West and Scarlett Road for reports that a cyclist was struck at around 1:20 p.m.

According to police, a 49-year-old driving a 2011 Honda Civic westbound on Eglinton was making a left turn when he struck a 24-year-old man riding a bicycle.

Police said the cyclist was on a bicycle path and was attempting to cross Scarlett Road when the collision occurred.

He was transported to a hospital, where he remains in life-threatening condition.

It is not yet clear how the collision occurred.

The drivers of the vehicle remained at the scene.

Police are asking residents, businesses, or drivers who may have security video or dashcam footage to contact investigators at 416-808-1900 or Crime Stoppers anonymously.