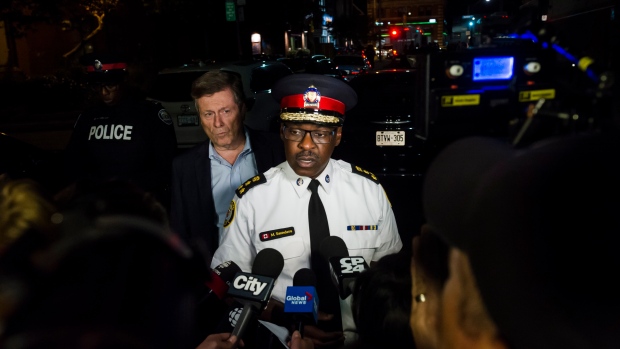 TORONTO - Sunday's deadly rampage in Toronto marks the latest in a growing list of fatal shootings in the city.

Gun deaths had accounted for 23 of Toronto's 52 homicides this year -- compared to 16 fatal shootings by the end of June 2017. Police statistics for 2018 indicate there were 199 shootings as of June 25, compared to 170 this time last year.

Here are some of the high-profile shootings in Toronto since January:

July 1, 2018: Nineteen-year-old Marcel Teme died days after being shot in the Kensington Market neighbourhood. He was among four people shot in the area west of the downtown core.

June 30, 2018: Two people associated with the city's rap scene -- 21-year-old Jahvante Smart, also known as Smoke Dawg, and 28-year-old Ernest Modekwe -- were killed in a shooting downtown. On the same day, a driver near Shuter and George streets took a shotgun out of her trunk and opened fire at a pedestrian, injuring the 21-year-old woman and a 69-year-old man on a bike.

June 24, 2018: Jenas Nyarko, 31, was killed when someone in an SUV fired a single shot into a car in which she was a passenger returning from a funeral. In a separate incident on the same day, two men were killed when multiple shots were fired into a home.

June 14, 2018: Two young sisters -- age five and nine -- were sent to hospital with gunshot wounds to their abdomen and leg after two men got out of a truck and opened fire at a playground where about 16 children were playing in the city's east end.

Jan. 23, 2018: A 20-year-old man was charged with seven counts of attempted murder after a string of random shootings over two weeks. Toronto police say the man allegedly worked his way through neighbourhoods, opening fire on a total of seven victims ranging in age from four to 47.