Deals reached with racetracks despite loss of slots 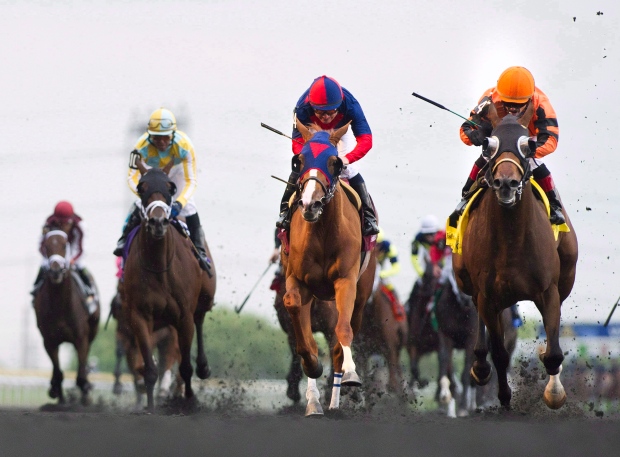 Jockey Justin Stein, right, and horse Strait of Dover cross the finish line to win the running of the 153rd Queen's plate at Woodbine Racetrack in Toronto on Sunday, June 24, 2012. (Aaron Vincent Elkaim / The Canadian Press)

ELORA, Ont. -- The horse racing industry reacted with cautious optimism Friday after Premier Kathleen Wynne announced the sector would be integrated into a provincial gambling strategy with Ontario Lottery and Gaming to find new revenue streams.

"We need the process of integration to begin as soon as possible if we have any chance of future survival for the industry," said Sue Leslie of the Ontario Horse Racing and Breeding Association.

The sector is still reeling after the Liberal government announced in last year's budget that it was cancelling the slots-at-racetracks program which had provided $345 million a year in revenues for racetracks.

"We are all hurting from the actions of this government," said Leslie.

"With all that this industry has been though the past year, it is understandably difficult to trust that these latest developments are going to yield the desired results. However, we view this as an important and positive step."

Wynne visited Grand River Raceway to announce the province had reached four more "transition funding agreements" with racetracks for a total of six, and was negotiating with eight others. The six tracks have agreed to hold a 2013 horse racing season.

One source who requested anonymity estimated the province would be putting about $200 million into the deals with the racetracks, but Wynne said she won't comment on how much money was involved until all the deals are completed.

"I'm not going to talk about specific dollar amounts because there are ongoing negotiations, but the (expert) panel made it clear that there needed to be different revenue sources, and we are going to work to put those in place," she said.

"A sustainable horse racing industry is going to be a smaller industry, and that's a reality that the industry is confronting."

Former Liberal cabinet minister John Wilkinson, a member of the three-person expert panel that examined the sector amid warnings that 55,000 jobs were at risk from the loss of the slot revenue, said integration with OLG is critical.

"We looked around the world, and where we see that there's a good relationship, a symbiotic relationship, between gaming and horse racing, you have a sustainable, vibrant horse racing industry," said Wilkinson.

The opposition complained Wynne's announcement was vague and did little to repair the damage caused by the loss of the slot machine revenues.

"This is nothing more than a photo opportunity in rural Ontario," said PC critic Michael Harris. "They've thrown 55,000 families for a loop for the last year, and this is too little, too late."

The NDP said Wynne's announcement was nothing but platitudes for rural voters.

"What this industry has been asking for, and what they need, is certainty on the horse racing side, on the agriculture side, and the breeding side, but the only thing today's announcement has bred is more uncertainty in rural Ontario," said New Democrat Taras Natyshak.

The expert panel set up by the government concluded the slot machine revenue had accounted for 64 per cent of the annual income for the horse racing sector in Ontario, and more than 60 per cent of purse money.

The horse racing association said having slot machines at 17 Ontario racetracks used to generate $1.1 billion profit for the province each year.

When the slots-at-racetracks program was cancelled, the Liberals said the government could not afford a "subsidy" to the horse racing set.

However, Wynne, who is also agriculture minister, refused to use that word Friday, and said the important thing was making sure the sector was viable in the future.

"I don't think labelling or parsing the semantics around particular words is going to be helpful," she said.

"It's about the jobs, it's about tourism, it's about the vibrant industry that has been in this province evolving to a place where it can be sustainable, and we know as government we've got a role to play in that."

Wynne announced the province signed three-year deals with Western Fair, Clinton, Hanover and Grand River racetracks, after reaching two-year agreements in January with the Woodbine Entertainment Group for the Woodbine and Mohawk tracks.