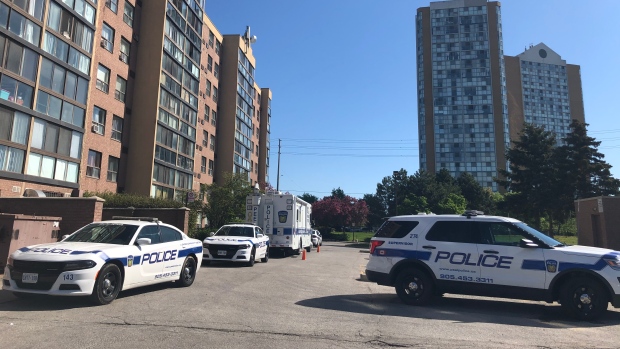 Police vehicles are shown at the scene of a suspicious death investigation in the Glenn Hawthorne Boulevard and Hurontario Street area of Mississauga on Saturday. (Shanelle Kaul)

The death of a man found in a Mississauga apartment on Saturday is not considered suspicious, Peel police say.

Officers were called to a building in the Glenn Hawthorne Boulevard and Hurontario Street area at around 12:20 a.m.

“We received a call from a citizen reporting the possibility of a dead body maybe in an apartment inside this building," Const. Kyle Villers said.

The coroner then attended the scene and initially deemed the death to be suspicious, police said.

On Saturday evening, police said the incident has been cleared and the death has been deemed non-suspicious in nature.

Villers said they are still working to determine whether the victim lived in the apartment where he was found.

Update:
- After completion of the postmortem exam this incident has been cleared and the death has been deemed non-suspicious in nature.